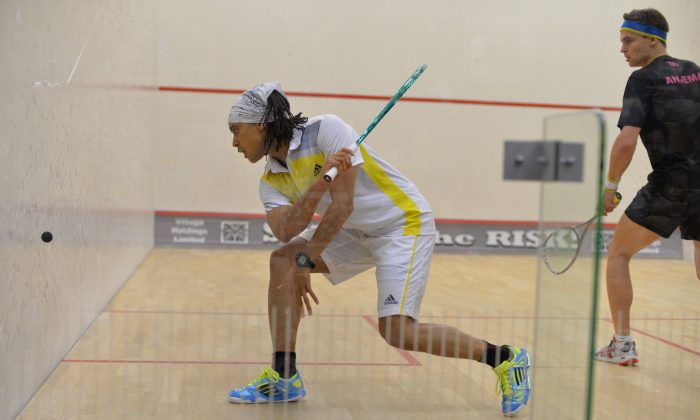 No.1 and winner of the tournament Alister Walker (Botswana) plays from the back-hand corner in the Final against Laurens Jan Anjema (Netherlands). Walker went on to win in three straight games. (Bill Cox/The Epoch Times)
International

Both finalists had squared off a few times since their junior days, with Laurens winning the head-to-head 5-2 before this Final.

“I think sneaking through that [five game] Quarter Final with Max [Hong Kong’s No. 1] really got me into the tournament, leaving me head-strong for the rest of it,” Walker told The Epoch Times.

“I played well I think.

“Moving around the court I felt really comfortable today,” he added.

Walker really did play some superb squash with great strategy to move his opponent out of position and then force the winning shot. He also recovered well when under pressure, often turning adversity into triumph.

Anjema, the No.2 seed from the Netherlands (now 17 in the world rankings), had been in top form all week, winning all of his previous matches in straight games, in fairly quick time. He looked sharp and well in command in those matches.

After his Semi-final, the night before the Final, Anjema told The Epoch Times that he felt well prepared.

“I have been focussing on bringing some variety into my game. It feels lovely when it comes off you know? I have turned into a much more three dimensional squash player instead of a one dimensional player.

“I am happy [to win in three games] not to waste any excess energy before the final tomorrow,” he said.

“I am 30 years old now and although it feels no difference physically, but mentally, people keep asking you: ‘You are 30 now, does it make any difference?’ It is just training every day and trying to add things to my game. Reduce my weaknesses and make my strengths even stronger.”

But Walker (now 14 in the world rankings), with his added experience, took the match in three straight games.

After the match, Walker summed up the Semi-final match to The Epoch Times.

“Yes it was tough,” said Walker.

“The kid is very talented and has got a lot of shots, and there is no rhythm, so you are always on your toes.

“I just managed to keep it tight and close the court down. Every game was tight, but fortunately it worked out.”

In the Final, Walker was the clear winner.

Although down 4-2 at the start of the first game, Walker came back with six straight points to lead 9-4 before taking the game 11-8.

In the second, Walker put together three strings of three points, including some super-normal retrieving in one of the rallies, before winning the point and going on to win the game 11-6.

The third game was very close up to 7-7, but then Walker won the next four points to close out the match.

Anjema, although not disappointed with his week, conceded Walker was better in the Final.

“His performance was magnificent,” said Anjema, “Simply moved me around better than I did him.

“I think the conditions were quite hard, you know? Quite bouncy and he played smarter than I did.

“I’m really happy with the whole week. I played some really good squash yesterday and Thursday, so I am pretty happy. I have got to stay positive. I have had a great week, but he was simply better today,” he said.

Both finalists now move onto play in the World Team Championships in Mulhouse, France, between June 9 and 15.

Walker leads the Botswana team, while Anjema is No.1 for the Netherlands.

Road to the Final