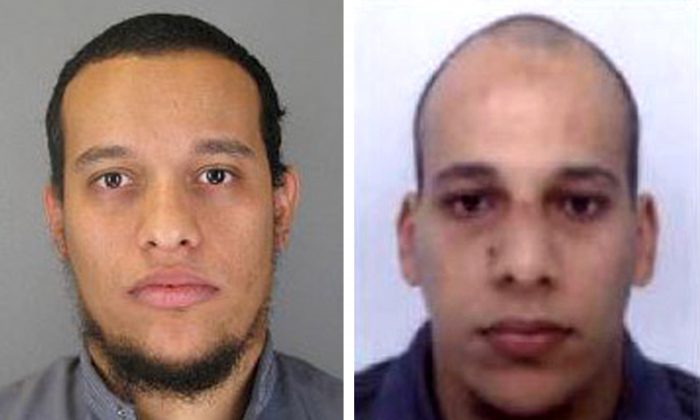 Pictured in this composite of handout photos on Jan. 8, 2015 are Said Kouachi, 34, (L) and Cherif Kouachi, 32, who were shooters in the attack at the satirical weekly Charlie Hebdo in Paris. (Direction centrale de la Police judiciaire via Getty Images)
Opinion

Let’s imagine a scene playing out in the rotten suburbs of Paris. A man takes a troubled youth by the arm as they walk through a blighted neighborhood and the persuasion begins.

“Listen kid, you think you’re worthless, but that’s only because people treat you that way. When has anybody given you a break? But I believe in you. I think you’re important. Don’t laugh, kid, I mean it. Important! I see what everyone else can’t see. A brave, smart, pretty damn special guy. The real you!

“And our band of brothers will always accept you, always be there for you, always look out for you. Because they are fighters and so are you. Yeah, like those guys you see in the movies. Like those commandos running around in the video game I just saw you playing. But this isn’t a game. There’s a higher purpose. Your life has meaning. And the best thing of all—there’s a big reward at the end!”

The scene could play out in struggling banlieues like Seine Saint Denis or Yvelines—areas of sky-high unemployment, described as incubators for the jihadi sentiment that inspired the Charlie Hebdo attacks.

It could just as easily play out in the slums of Los Angeles where drug gangs recruit members; the Texan hinterlands where the Branch Davidians took root after a four-decade schism within the Seventh Day Adventists; Moscow neighborhoods where neo-Nazi bands beat up foreigners; or the Tokyo underground, both in a figurative and literal sense, where the Aum Shinrikyo cult, which combined elements of Buddhism and Hinduism, registered as a religious group in 1989 and attacked the city’s subway system with sarin gas in 1995.

Religious fervor rarely has much to do with what draws people to join such groups. Deep down, it’s about purpose. Belonging. Excitement. A sense of identity. Order amid disorder. A focus for pent-up rage.

The profound insight of the jihadi recruitment machine is that the cause can be anything—as long as the needs are satisfied.

Educators, politicians, business leaders may struggle to put themselves in the shoes of the recruit—stuck in a dead-end life, a housing project that resembles the prison he may have just left. Many of the targets lack the skills to analyze the recruiter’s message or talk back because he may have dropped out of school at age 14. Anyone feeling marginalized might find the message appealing. And a host of heavenly virgins for dying as a martyr? Not a bad deal.

Religion contributes the iconography, the alibi, and the overarching structure for a “mission impossible.” The insult to religion so often can be conflated with the personal insult the youth feels he or she has suffered from peers, police or “le patron.” And transforming what is essentially an intimate grudge into a holy one can surely feel—perhaps for the first time in one’s life—ennobling.

Whether the “big reward” is a martyr’s paradise or a worldly paradise of fast cars and women, the recruiters for criminal enterprises hawk an intoxicating message for youths living at the fringes of society or who otherwise have some acute grudge against it. The alienation is not just economic, but primarily a radical social dislocation, as suggested by the middle-class backgrounds of many of the recent recruits to Syrian jihad and the elite profile of some of Japan’s Aum cultists. This underscores the risk that Europeans and Americans of non-Muslim backgrounds may increasingly fall under the spell of groups such as the ISIS or al-Qaeda, as seen in isolated instances.

It is striking how little religion factored in the teenage lives of the Kouachi brothers who killed Charlie Hebdo journalists and the Jewish store attacker Amedy Coulibaly, a pattern seen time and again among Europe’s homegrown terrorists. In his teens, Cherif Kouachi enjoyed pot and beer, and wanted to be a rapper. Coulibaly was a drug pusher, and all three dabbled in petty crime.

In a video Coulibaly pledges allegiance to ISIS, mangling the Arabic reading from what appears to be a prepared text. Coulibaly and the Kouachi brothers, while partners, pledged allegiance to jihadi camps that hate one another. Speaking to police, Coulibaly’s wife described him as something of a party animal. Rather than the austerity of Islamic fundamentalism, all three appear to have been drawn originally to the escapism of Western hedonism.

By joining jihad, the trio traded one escapism for another.

It was an attempt to escape everyday drudgery, utter futility, and a system in France that can legitimately be said—from employers tossing the résumés of applicants with Muslim names to the failed schools that serve immigrant populations—to set up roadblocks to success for minorities.

It is an escape from freedom, which German psychologist Erich Fromm suggested to be the most seductive of drugs, and perhaps not least an escape from boredom.

No one can know for sure, but it’s plausible to read the Kouachi brothers’ chant of “Allahu Akbar!” as they burst into the offices of Charlie Hebdo as being less a sacred pronouncement than an escapist rallying call along the lines of “Hasta la vista, baby.” Many jihadi yearn to play a role in a movie or video game.

French Prime Minister Manuel Valls, among the few leaders of the Left to take a critical line regarding Muslims in France, has been equally courageous in the wake of the terror attacks to say that France must grapple with an “ethnic apartheid” testing the nation. The point made by some critics, that France has no official policy of separation of races is irrelevant, although it must be said that some of the grim housing projects ringing Paris were built expressly for immigrants from former colonies who provided the muscle for post-war growth.

It’s futile to assign blame to the French mainstream or to the Muslim minority. Whatever the merits of Valls’s assertion, the truth is that France is in the grips of a vicious circle of deep mistrust and spiraling hostility that effectively creates a wall between two cultures, neither of which holds a good record of trying to find common ground.

A great debate is raging in Europe about whether the multicultural model traditionally linked with Britain or the integrationist model so staunchly championed by France, is the best approach to foster a decent society. And we must fight for a decent society. In Britain and France, which have both suffered horrific terror attacks in recent memory, both models have been shaken to the core.

It may also be useful to reflect on why some societies with multi-ethnic and multi-religious makeups have tended to be less prolific in generating jihadi recruits, whether the reason is social conditions, economic integration, government policy or other factors.

Whatever the outcome of these debates, and it’s possible to find some middle path, it is imperative that our liberal world come to grips with the “cause profonde” of the growing extremism among European Muslims—a profound social dislocation that seeks to transform personal resentments into higher causes—as we grope for solutions to eradicate the scourge.

Joji Sakurai is a veteran journalist who has reported from Japan, Italy, North Korea, Mongolia, China, France, Britain, and Brazil. He covered Japan’s 2011 tsunami crisis and the 2013 historic papal transition in Rome. © 2014 YaleGlobal, the MacMillan Center at Yale.