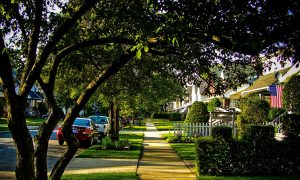 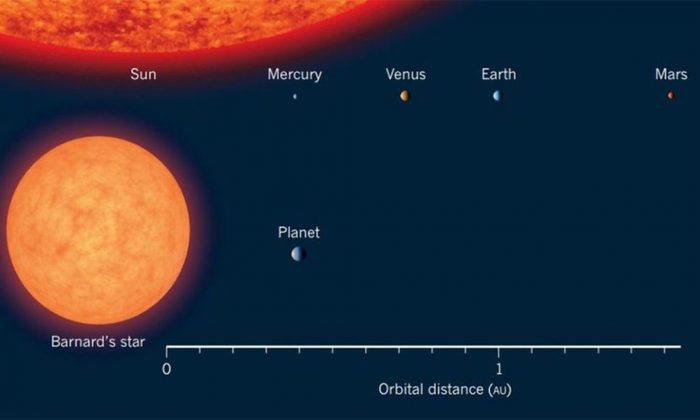 Barnard B, the planet that orbits around Barnard's Star could have the potential for life if water exists there, according to a new study published by astrophysicists at Villanova University. (Villanova)
Space

Researchers say that alien life could possibly exist on a planet 30 trillion miles from Earth.

Barnard B, the planet that orbits around Barnard’s Star could have the potential for life if water exists there, according to a new study published by astrophysicists at Villanova University. The star is located some 6 light-years away from Earth in the constellation of Ophiuchus and is the fourth-nearest known star to the Sun.

An ocean could provide the possibility for the existence of primitive life due to geothermal heating.

“Geothermal heating could support ‘life zones’ under its surface, akin to subsurface lakes found in Antarctica,” said Edward Guinan in a statement.

According to the paper, the temperature on Barnard B is similar to Europa, Jupiter’s moon, and is roughly 238 degrees F below zero.

But if there is water on the planet, geothermal heating could provide conditions for life in an otherwise inhospitable environment, the researchers add.

“We note that the surface temperature on Jupiter’s icy moon Europa is similar to Barnard b but, because of tidal heating, Europa probably has liquid oceans under its icy surface,” Guinan said in the statement.

Guinan, who worked on the research with Scott Engle, presented their findings at the American Astronomy Society (AAS) in Seattle last week.

Barnard B was only discovered a few years ago, but Barnard’s Star has been the subject of intense speculation, Guinan said.

“In 2003 it became a founding star member of the Villanova ‘Living with a Red Dwarf’ program that has been sponsored by the National Science Foundation/National Aeronautical and Space Administration (NASA),” he said.

Barnard B was discovered in November 2018, and it has “a mass just over three times that of the Earth,” Villanova’s website says.

Barnard’s Star, meanwhile, is a red dwarf star and is the second-closest star to the Earth and our solar system after Proxima Centauri.

A red dwarf is a small, old, and relatively cool star. “Scientists think that 20 out of the 30 stars nearest to Earth are red dwarfs; however, none of them can be seen with the naked eye. The closest star to the sun, Proxima Centauri, is a red dwarf,” according to Space.com.

Barnard B orbits around ist star every 233 days at “at roughly the same distance that Mercury orbits the Sun,” according to the website, which added that “it passes near the dim star’s snow line.”

Some have said that Barnard B is not a likely planet to host life due to the distance from Barnard’s Star and might not possess an atmosphere.

However, according to Engle and Guinan, this might not be the case.

“The most significant aspect of the discovery of Barnard’s star b is that the two nearest star systems to the Sun are now known to host planets,” Engle said. “This supports previous studies based on Kepler Mission data, inferring that planets can be very common throughout the galaxy, even numbering in the tens of billions.”

He added: “Also, Barnard’s Star is about twice as old as the Sun–about 9 billion years old compared to 4.6 billion years for the Sun.”

“The universe has been producing Earth-size planets far longer than we, or even the Sun itself, have existed.”

To make their hypothesis, the two researchers obtained high-precision photometry of Barnard’s Star and other stars over the past 15 years.

“Such observations will shed light on the nature of the planet’s atmosphere, surface, and potential habitability,” Guinan added.