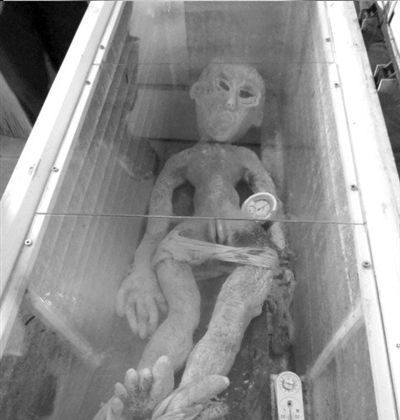 For several days last week China’s blog sphere was abuzz with a story and photos of a man claiming to have recovered the body of an alien being. What’s so odd about it is that state media also got in on the frenzy until the whole thing was determined to have been a hoax, and the man was arrested by the police.

Li Kai, a man from Binzhou City in Shandong Province, posted photos of a dead alien in an ice chest on Sina Weibo, China’s Twitter-like service on June 8.

Li said he hunts wild rabbits and pheasants along the banks of the Yellow River and was checking his traps in the early morning hours of March 9 when he came across a UFO and ended up fighting several extraterrestrials. One of the aliens touched a high-voltage electric trap and was electrocuted, Li said. He then preserved the alien’s body in a refrigerator.

But on June 12, state-owned China Central Television (CCTV), reported that Li was being charged with “fabricating rumors and disturbing social order” and would be punished by five days detention.

Beijing Evening News said Binzhou City police stated on June 10 that Li, after being summoned and interrogated, had admitted to making the body from rubber.

However, local public security authorities soon after denied the report, saying they had not issued that press release, instead, they said that Li had confessed to purchasing the alien body model at another village on the river for about 20 dollars.

CCTV’s news coverage in particular created quite an uproar and got more than a million hits on Sina’s microblog website alone.

One reader commented: “What he did was merely a joke. It doesn’t create upheaval or instability to the society. … Let us put it this way: CCTV plays big jokes on us every day, and some other government organization jokes about incorruptibility every day. … Why doesn’t public security step in then?”

Another netizen said: “Yes, Li did fabricate the facts, but what order did he disturb? Who suffered from the fabricated incident physically, spiritually or financially? Telephone frauds have been so rampant everywhere, but the police haven’t arrested anybody. Why should a man be kept in custody for five days simply because of playing a joke about extraterrestrials!”

Translated by Leo Chen. Written in English by Gisela Sommer.