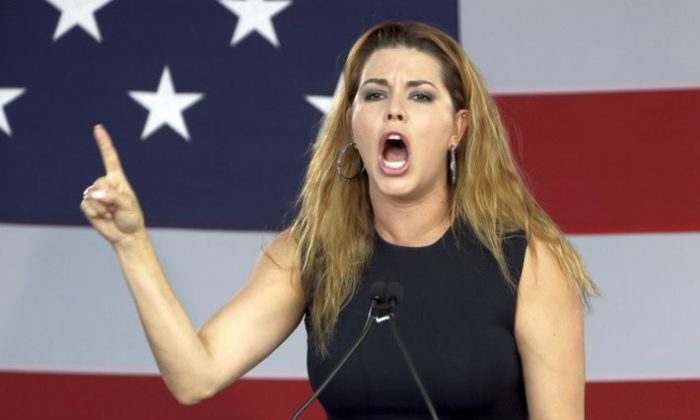 Hillary Clinton said that Donald Trump criticizes women for their looks because he’s “a bully.”

Clinton is unleashing a series of attacks on Trump during a rally in Dade City, Florida. She is now focusing in particular on his comments about women.

Clinton was introduced by former Miss Universe Alicia Machado, who was criticized by Trump in 1996 when she gained nearly 60 pounds after winning the Miss Universe title.

“She was the winner and you know, she gained a massive amount of weight and it was a real problem. We had a real problem,” Trump told “Fox and Friends” in September.

Clinton said to the crowd: “Can we just stop for a minute and reflect on the absurdity of Donald Trump finding fault with Miss Universe?”

She noted that Trump panned Machado as “somebody who likes to eat.” She then said with a smile, “Well, who doesn’t like to eat?”

Machado recalled how Trump “made fun of me and I didn’t know how to respond,” adding that “he was cruel.”

In a May 2016 report, Trump told the New York Times that he pushed Machado to lose weight. “To that, I will plead guilty,” he said.

“It’s really clear that he does not respect women,” Machado said. “He just judges us on our looks. he thinks he can do whatever he wants and get away with it.”

Several days ago, Clinton appeared with women’s rights activists, which included Planned Parenthood’s Cecile Richards, at an event in Iowa. Clinton went after Trump for telling Howard Stern that he went into beauty pageant contestants’ dressing rooms when he owned the Miss Universe pageant. “I’ll go backstage before a show, and everyone’s getting dressed and ready and everything else,” he said in 2005.