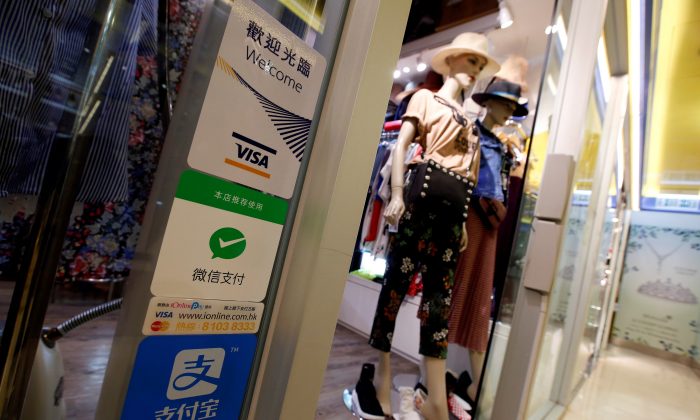 Labels of digital payment (from top) VISA, WeChat Pay and Alipay are displayed outside a boutique at a shopping mall in Hong Kong, China, July 31, 2018. (Reuters/Bobby Yip).
Media & Big Tech

China’s largest internet corporations are decimating their walled-off ecosystems amid Beijing tightening regulations on its tech giants. The latest instance came when Alibaba Group allowed rival Tencent’s payment system to be integrated with some of its apps this week.

Such practices have come under scrutiny from Chinese regulators, which have launched new rules across areas from data security to anti-monopoly.

Alibaba confirmed the change with state-run media The Paper on Sept. 28, adding that “the company will continue to find common ground with peers to serve consumers better.”

Consumers in China are far more accustomed to transacting on a daily basis using Tencent’s WeChat Pay and Ant’s Alipay rather than cash or credit cards. Both services have around one billion users and have historically blocked links from within their services to rivals’ content.

The country’s internet arena has long been dominated by ecosystems built around the two giants. Through their apps, users can access a range of services, from grocery shopping to flights and hotel booking services. Without leaving these apps, people can pay for most of their goods and services.

Top technology regulators have ordered large internet companies to stop blocking links to one another’s content as part of a broader campaign to curb their growing monopoly power over data.

China’s Ministry of Industry and Information Technology (MIIT) called a guidance meeting on Sept. 9 with a handful of tech giants over issues such as blocking links, according to the 21st Century Business Herald. Attendees included companies listed on the New York or Hong Kong stock exchanges, like Alibaba, Tencent, Baidu, Xiaomi, etc.

Days later, Tencent’s messaging app, WeChat, started allowing users to access external links. Previously, it had not allowed its users to click on links sent via chat to, for example, the product listings from Alibaba’s online Taobao marketplace.

The changes are taking place as Chinese authorities continue to tighten regulations in the internet sector. The integration of WeChat Pay with Alibaba’s apps is apparent to go one step further.