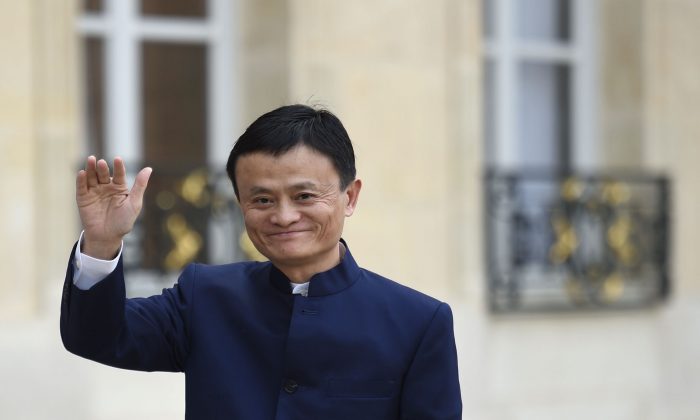 Chinese entrepreneur and founder of internet retail group Alibaba, Jack Ma, waves to journalists as he arrives for a meeting with French President Francois Hollande at the Elysee Palace in Paris on March 18, 2015. (MARTIN BUREAU/AFP/Getty Images)
Business

Michael Evans, 56, retired in 2013 after more than 20 years with Goldman Sachs, 7 of them heading the firm’s Asian operations. An independent board member at Alibaba since the company’s initial public offering in the United States in September 2014, he now has the title of president of the Alibaba Group.

It is well known that doing business in China requires being on the right side of those in power.

While some global retailers have been resistant to using Tmall due to a range of concerns, including fears that Alibaba’s reputation for counterfeit goods could damage their brands, some of the world’s most prestigious brands already use the site to reach lucrative Chinese buyers. Unofficial statistics suggest that around 70,000 Chinese and international brands have already opened virtual stores.

It is well known that doing business in China requires being on the right side of those in power. Before Xi Jinping became China’s leader, people loyal to former leader Jiang Zemin closely controlled most of the state apparatus and the business community. It is this former clique, known as the “Jiang clique,” that is closely connected to the Alibaba group. Without the relationship Jack Ma would never have gained his wealth.

Through his aggressive anti-corruption campaign, Xi has been systematically weakening Jiang clique’s power, notably through the arrests of former top government officials, including former Minister of Commerce Bo Xilai and former Secretary of the Central Political and Legal Affairs Commission Zhou Youkang. Xi has also been cleaning up corruption within private business, using the campaign as a pretense to go after whomever he chooses.

In January, Xi’s scrutiny of Alibaba made international headlines. In a white paper published in January, China’s powerful State Administration of Industry and Commerce accused Alibaba of failing to crack down on the sale of fake goods on its sites, and for tolerating other types of illegal activities, including bribery. After Ma met with authorities, the e-commerce conglomerate had more than $30 billion wiped from its market capitalization, and the white paper was later removed from the agency’s website.

Earlier this year, media reports suggested Alibaba was coercing brands into joining Tmall by promising to more rigorously police Taobao for counterfeits of its products, if the brands joined.

While Ma is the public face of Alibaba, ordinary working-class Chinese are grudgingly aware that the company is truly controlled by scions of the communist party’s former top leadership. But the extent of the ownership is difficult to calculate because of a web of offshore shell companies. According to Alibaba’s prospectus disclosure, the company’s shareholders include Jiang’s grandson’s Boyu Capital Fund I L.P., registered in the Cayman Islands; current Politburo member Liu Yunshan’s son Liu Lefei’s Citic Capital Holdings, and a founder of the Communist Party Chen Yun’s son Chen Yuan’s CDB Capital. Yun was a former high-level economic-planning official, and a member of the Politburo Standing Committee for around five decades starting in the 1930s.

An indicator that Xi was purposefully weakening the Jiang faction occurred on Jan. 8 when Jiang’s son Jiang Mianheng, a telecommunications magnate, was fired from his position as president of the Chinese Academy of Sciences Shanghai Branch. Something like this would not happen in China without an extremely powerful directive behind it.

Selling on Alibaba Sites in China

Amazon recently opened a store on Tmall, and Costco Wholesale Corp., Zara, Burberry Group plc, Gap Inc., Nike Inc., and ReebokInternational also have Tmall stores. The other highly popular Alibaba site, Taobao, which resembles eBay as a garage-sale-type reseller, is infamous for its huge number of counterfeit and gray market goods—this is the site that was blasted by the white paper in January. In May Kering brands, including Gucci and Yves Saint Laurent, sued Alibaba for allegedly profiting from counterfeit products sold through Taobao.

Alibaba periodically promises to increase its efforts to police counterfeits on Taobao. Earlier this year, media reports suggested Alibaba was coercing brands into joining Tmall by promising to more rigorously police Taobao for counterfeits of its products, if the brands joined.

Coach Inc. was the first international luxury brand to join Tmall in early 2012. Today, unauthorized sellers on Taobao have listed more than 26,000 Coach products. Many of those products are counterfeit. Counterfeit Coach products are produced in great quantities in China, as are authentic products, some of which are illegally passed on to resellers.