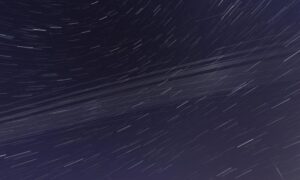 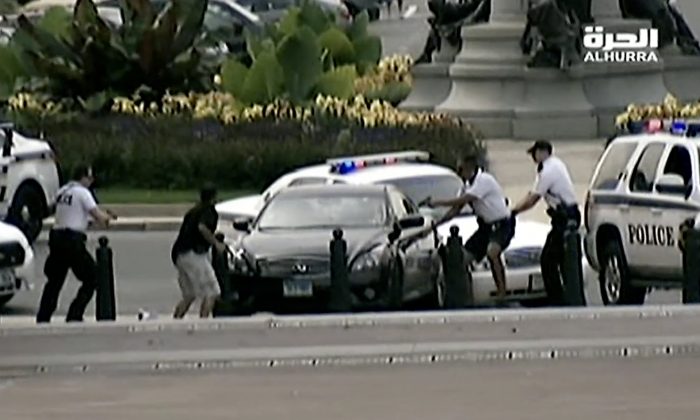 This image from video provided by Alhurra Television shows police with guns drawn surrounding a black Infiniti near the U.S. Capitol in Washington, Thursday, Oct. 3, 2013. A woman with a young child inside tried to ram through a White House barricade, then led police on a chase toward the Capitol, where police shot and killed her, witnesses and officials said. (AP Photo/Alhurra Television)
News

Alhurra TV got the first footage of the car chase and gunshots fired in Washington, D.C. on Thursday, in an area with numerous media outlets.

The station is funded by the U.S. government through a grant from the Broadcasting Board of Governors (BBG), an independent federal agency, according to its website. Its mission is “to provide objective, accurate, and relevant news and information to the people of the Middle East about the region, the world, and the United States.

Although photos of the situation in Washington D.C.–where a woman was chased by officers, who later shot her–were published quickly online both through wire agencies and people on the scene, no videos popped up until Alhurra captured both a part of the chase and the end of the chase.

That included federal and police officers surrounding the suspect’s vehicle with guns drawn, as seen in the image.

How did the station get the footage?

BBG spokesperson Lynne Weil told ABC that “The TV crew was in the right place at the right time to capture extraordinary and exclusive footage of a major news event [that] took place in the U.S. and needs explaining to people elsewhere in the world.”

Alhurra is operated by the non-profit Middle East Broadcasting Networks, which also runs Radio Sawa. “These networks provide the United States an undistorted line of communication with the people of the Middle East,” according to BBG’s website. “They deliver accurate and objective information about America, American policies and its people with a broad range of perspectives and an open exchange of ideas on issues of importance to the audience.”

The budget for the organization is $110.3 million a year.