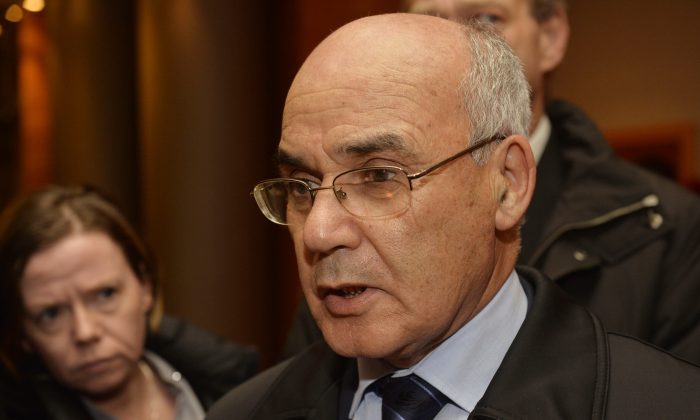 Algeria's Minister of Energy and Mines Youcef Yousfi arrives at the hotel on Nov. 26, 2014, prior to the start of the 166th OPEC Meeting in Vienna, Austria. (Samuel Kubani/AFP/Getty Images)
Africa

ALGIERS, Algeria—Algeria’s oil minister on Sunday called on OPEC to cut production and raise the price of oil, which has plunged dramatically in the last six months.

The call by Youcef Yousfi to the Organization of Petroleum Exporting Countries, of which Algeria is a member, comes as the country is struggling to deal with a halving of oil prices from $120 barrel to $60 a barrel.

“For us, OPEC has to intervene to correct the imbalance and cut production to bring up prices and defend the income of its member states,” Yousfi said in remarks carried by the state news agency.

While Algeria has some $200 billion foreign reserves, enough to cover imports for the next several years, it is heavily dependent on its oil revenue which provides 97 percent of its hard currency income and 60 percent of the budget.

In a cabinet meeting Tuesday, President Abdelaziz Bouteflika for the first time expressed concern over the “worrisome” situation and made vague promises of cost-cutting.

The first of such austerity measures came Saturday when Prime Minister Abdelmalek Sellal said there would be a freeze on public sector hiring in 2015. Some 60 percent of the jobs in the country come from the government.

Major infrastructure projects, such as public transportation in Algiers and highways in the countryside are also expected to be put on hold.

Long flush with money from its gas and oil exports, Algeria operates an extensive welfare state.

Subsidies, which amount to 21 percent of the country’s annual economic output, cover electricity and many foodstuffs. Gasoline is the cheapest in North Africa.

The government also subsidizes education and provides housing. Social unrest, even before the scattered protests of the Arab Spring, was effectively bought off with higher wages and promises of housing — all funded by the bountiful oil receipts.