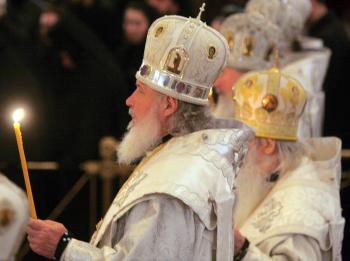 Metropolitan Kirill holds a candle during a farewell ceremony for the late Patriarch Alexy II, the head of the Russian Orthodox Church, in Christ the Savior Cathedral in Moscow, on Dec. 6. (Dmitry Kostyukov/AFP/Getty Images)
Europe

Head of Russian Church to be Buried in Moscow on Tuesday

Kremena Krumova
Kremena Krumova is a Sweden-based Foreign Correspondent of Epoch Times. She writes about African, Asian and European politics, as well as humanitarian, anti-terrorism and human rights issues.
View profile
Follow
biggersmaller
Print
The head of the Russian Orthodox Church Alexy II will be buried on Tuesday, Dec. 9, reported Russian national news agency Itar-Tass. The ruling on the burial date was made by the Holy Synod in Russia at its emergency meeting on Saturday. The funeral will be held at Moscow's Cathedral of the Epiphany after a service at the Moscow's giant Cathedral of Christ the Saviour. The Patriarch died last Friday at the age of 79 from heart failure.

A new leader of the Russian Orthodox Church should be elected within the next six months, Itar-Tass said. The decision will be made by the Russian church council with the participation of bishops, clergymen and laymen delegated by the church parishes.

Well-known Bishop Kirill, 62, was appointed as a temporary predecessor through secret ballot in Moscow only a day after Alexy II's death. Bishop Kirill is highly respected for his erudition and is popular among the masses of Orthodox Christian followers for his regular participation in broadcasts.

Media reports in Russia have also unearthed links between the deceased Patriarch Alexy and the Kremlin, alleging that the Patriarch had been a long-serving KGB agent code-named "Drozdov" (the "Thrush") who received a "certificate of honor" for his service by the Soviet authorities in 1988. Patriarch Alexy was accused of providing information on dissident priests who were thrown into jail for disobedience. Reports also alleged that the KGB even sent him on a mission to England as a secret agent with a church delegation in 1969.

The newly appointed Bishop Kirill is the current head of the Church's department for external relations. He is considered the public face of the Russian Church and is known for his close relations with the Vatican. He has also been responsible for building close relations with Christian churches around the world. Bishop Kirill is regarded as a reformist prone to reforming doctrines and church practices, and has been considered a controversial figure in the conservative Orthodox Church.

After his appointment, Bishop Kirill will become the second Russian Orthodox Church chief after the fall of Communism in 1990. It is believed his appointment is a move that could open the way for establishing closer ties with Catholics.

In Russia, Orthodox Christianity is the main religion with more than 100 million followers, nearly 70 percent of the country’s population. This makes Russian Christians the biggest Orthodox Christian community in the world.