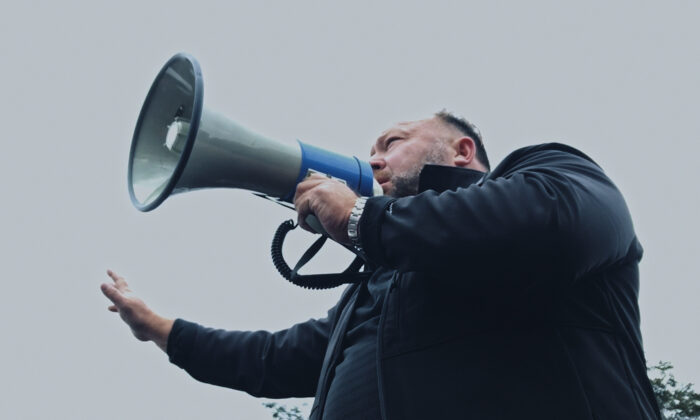 A still from the film "Alex's War" about Alex Jones. (Courtesy of Alex's War)
Film & TV

“Alex’s War” is the title of a new documentary by Alex Lee Moyer. Its controversial subject matter could qualify Miss Moyer as the Alex waging a war in the title, but it actually refers to Alex Jones. You’ve probably heard of Jones before, but to refresh your memory, he is a non-partisan political activist, famous conspiracy theorist, well-known radio personality, and the founder of Infowars.com. Often called the most banned individual in the world, Jones is so controversial that his channels have been deleted and barred from most online platforms, and his own website frequently changes its hyperlinks because Google often takes them down. Although the mainstream media denies that he is a reliable source of information, it’s possible Jones has something to say that Big Tech companies don’t want you to hear.

Nevertheless, Alex Jones has been and continues to be heard by millions of Americans across the country. Although his name is usually taboo, he was recently in the headlines because of a defamation trial regarding his previous statements that the Sandy Hook shooting was faked. As usual, most media sources provided truncated news bulletins about the trial, with little context or details to provide a clear picture of the whole story. Meanwhile, Jones’s name is frequently mentioned in connection with the historic but widely debated incident in Washington, D.C. on Jan. 6, 2021, which is also in the headlines again because of more trials surrounding its alleged instigators and participants.

Released on July 29, “Alex’s War” is a timely, unbiased, and honest look at Alex Jones’s side of Jan. 6, the Sandy Hook trials, and his characterization in the media. It was neither made nor sponsored by Infowars or Jones. In fact, according to an interview with Moyer, one of the hardest things about its making was persuading Jones to film the necessary interviews. Jones was probably suspicious of anyone’s intentions in making a documentary about him, since few companies would be interested in making a truly open-minded feature about his life, as Play Nice Productions has done.

Many documentaries are narrated by an anonymous voice, which editorializes about featured footage and images. Instead, “Alex’s War” lets Alex Jones and longtime Infowars employees tell the story from their years of firsthand experiences, as captured in exclusive interviews. Rather than using a chronological timeline to tell Jones’s story, the film jumps back and forth between recent events and earlier chapters in his life. Much of the footage is from television shows and documentaries Jones has made over the years, pieced together with recollections and explanations from the man himself. In fiction and nonfiction films alike, it can be hard to keep track of events when the timeline isn’t presented in sequence. However, a countdown to one important event can anchor the whole film.

“Alex’s War” used Jan. 6 as its pivotal event, providing context about dates by showing the number of days before the event when relevant incidents occurred. This effectively built anticipation toward Jan. 6—the climax. I, for one, have heard many varied accounts of what happened that day. The liberal media and its devoted followers have loudly accused people like Donald Trump and Alex Jones of inciting a violent insurrection, demanding that these leaders and their devoted followers be held on charges. With many “firsthand” accounts telling diametrically opposed stories, it can be difficult to separate political hogwash from the truth.

It’s clear from the documentary that everyone in the Capitol in the days leading up to the so-called insurrection knew that the freedom rally on Jan. 6 would be a historic event. The disastrous results were reportedly far from what Alex Jones and his team hoped would transpire, but they were nonetheless historic. When later compiling the documentary about Jones, Moyer would utilize footage of Jones addressing the throng in the Capitol to show, rather than tell, what happened on that day.

If “Alex’s War” were a 1940s Hollywood production, Orson Welles would have played Alex Jones. I found that this film reminded me of “Citizen Kane.” Both Jones and Charles Foster Kane are media moguls who influence how millions think. Each came from humble beginnings but rose to world prominence. Jones’s booming voice, larger than life personality, and almost theatrical histrionics reminded me of Welles’s dramatic characteristics, which he displays in “Citizen Kane” and his other films. Seeing Jones age from a smooth-faced, pleasant-looking youth to a bearded, burly middle-aged reminded me of Welles’s elaborate cosmetic transformation from a beautiful youth to a care-worn old man. The boyish looks may have faded, but the steely resolve is still there.

Much like Welles’s piece de resistance, “Alex’s War” follows a man’s life from infancy to middle-age through interviews with people who worked with him and knew him best throughout the years. The investigative reporter searching for the truth about Charles Kane’s life is nameless and faceless, played by an uncredited actor who is never clearly seen onscreen. The camera plays the same role in investigating Jones’s life, since it too focuses on the people being interviewed instead of the interviewer. No third party needs to put a spin on the events. Instead, viewers get to follow this reporter in his quest for the truth and the story behind the story.

The main difference between these stories is that “Citizen Kane” follows a postmortem investigation of Kane’s life, but Jones’s story is still being written. He isn’t the man who sold his ideals for power and success. He is the man who has largely stuck by his unpopular convictions for decades, despite being branded a fraud, a charlatan, an exhibitionist, and even a madman. Over the years, his voice has grown raspier from hours of yelling what he perceives as the truth, and his face has become lined through decades of questioning, resisting, and fighting what he views as the destruction of American rights and values. In his later years, Kane no longer seems like the college dropout who “thinks it would be fun to run a newspaper.” Similarly, it’s often hard to remember Jones as the young commentator asking if his hair looks all right before filming. His youthful energy has been replaced with mature resolve. Even if you don’t agree with or believe a word he says, you can respect the way Jones has stood by his convictions all these years, despite being opposed by his closest family members.

Before watching the trailer for “Alex’s War,” I had never seen footage of Alex Jones. I’ve heard many conservative people say that he is over the top, too bombastic, too loud, and that he gives a bad name to quieter conservatives. I could understand these opinions from the trailer’s brief clips, which included some of his wilder moments on his show. However, I saw a very different side of Jones in the actual documentary. In the original interviews, when he talked about his experiences and his concerns for the future, he struck me as a very sensitive man who is passionate in his concern for the fate of our country and world. Rather than a ranting lunatic, I saw a family man who is now looking more and more to faith in God as his only hope. I didn’t think his moments on the air seemed like a falsified character, though. They seemed more like just another side of the same multi-faceted individual.

I encourage you to give Alex Jones another chance. Maybe you’re very familiar with his work and career, or maybe you’ve only seen snippets over the years. Whether you love him, hate him, or barely recognize his name, I encourage you to watch “Alex’s War.” It doesn’t try to convince you, radicalize you, or brainwash you. It just presents the honest facts about his life and gives him a chance to tell his side of the story. You may find, as I did, that you learn something new about a unique individual and one of the strangest passages in American history. Regardless of your final takeaway, it is an informative, entertaining 135 minutes.

“Alex’s War” is playing at select theaters nationwide, can be purchased on DVD or BluRay, and is available to stream on several online platforms, including Prime Video, Google Play, Apple TV, YouTube, and Vimeo On Demand. Visit the film’s official website to find out where you can see it.