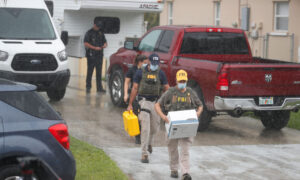 Rachel Ryan, a reporter with WAHU, said that the K-9 unit returned with no new info, and a tow truck is taking Alexis Murphy’s car away.

The car of a missing teen, Alexis Murphy, was just found in Charlottesville, Virginia.

Rachel Ryan, a reporter with WAHU, tweeted pictures of the car with law enforcement officials arriving on the scene.

Murphy, 17, has been missing since Saturday after saying she was going to go shopping in the Lynchberg area, according to CBS.

Multiple agencies, including the FBI and the Virginia State Police, are working on finding her.

A K-9 unit is on the scene, reported Ryan. Murphy’s car was found at Albermarle Square, off of Route 29.

She later said that one of the K-9 dogs has picked up a scent and is searching an apartment complex beside the Carmike Theatre.