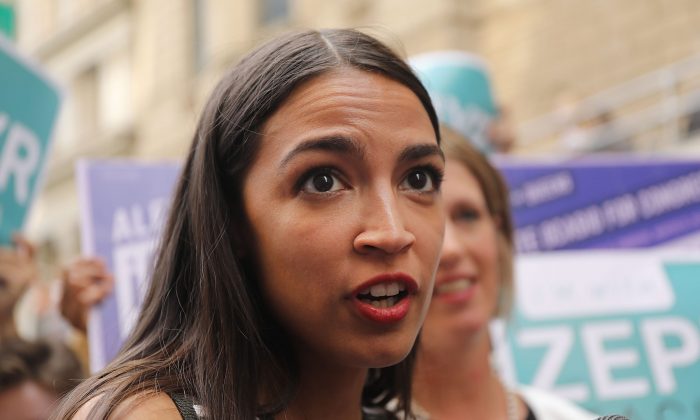 A video showing Rep. Alexandria Ocasio-Cortez (D-NY) dancing from several years ago resulted in a number of misleading, clickbait headlines that claimed conservative news outlets were outraged by the video, according to a critic.

Ocasio-Cortez, a member of the Democratic Socialists of America, is seen playfully dancing in the video in acting out a scene from “The Breakfast Club.” The video has been online for years, but it resurfaced on Twitter last week, drawing heavy media coverage.

The New York Times, GQ, Newsweek, Reuters, and other news outlets made claims that conservatives were outraged by the clip.

But one media critic, Clay Waters of the Media Research Center, wrote that “conservatives were not actually offended by it.”

“It caused a social media stir, with the mainstream media and liberals lining up to cheer it and condemn conservatives for being offended by it. The only problem: Conservatives were not actually offended by it,” he wrote.

He noted that the Times posted a story, “Alexandria Ocasio-Cortez Dancing Video Was Meant as a Smear, but It Backfired,” but the article doesn’t cite any evidence of conservative outrage.

“The video showed Ms. Ocasio-Cortez, 29, dancing barefoot on a rooftop. If it was meant to be an embarrassing leak, it backfired badly,” the Times said. It added that “some also saw a right-wing effort to undermine Ms. Ocasio-Cortez,” without offering any evidence.

Waters called articles about the alleged Ocasio-Cortez-triggered conservative outrage the “latest knee-jerk liberal mockery of conservatives” who are being “accused on absolutely no evidence of being offended by something.”

He added: “No one but the original Twitter poster (@AnonymousQ1776, now deleted) was scandalized by the clip. That doesn’t stop May from finding fans of the left-wing congresswoman:”

Ocasio-Cortez, meanwhile, used the opportunity to attack her political rivals, tweeting a video: “I hear the GOP thinks women dancing are scandalous. Wait till they find out Congresswomen dance too! Have a great weekend everyone :).”

Newsweek was also slammed for its coverage of the alleged conservative outrage.

The article mentions a single anonymous account. Not one conservative. @newsweek = 💩💩💩 pic.twitter.com/aywV2Bka20

“The article mentions a single anonymous account. Not one conservative,” tweeted Dave Rubin, while posting emojis suggesting Newsweek is the equivalent of human waste.

Lol and by "conservatives" this writer means.

"One Twitter user, whose handle referenced the QAnon conspiracy theory" @Newsweek should retract this https://t.co/jiLNvShR7r

“Which conservatives did this, @Newsweek? I’m only asking because your article names exactly zero of them. Kinda weird,” wrote Jerry Dunleavy.

Which conservatives did this, @Newsweek? I’m only asking because your article names exactly zero of them. Kinda weird. https://t.co/2xXr3ogKrQ

As several journalists noted, no conservatives mocked her. So we can wait for them to also correct this. https://t.co/61V56iLO1p

Reuters also faced criticism for its coverage and headline.

This lame #Reuters article proves my point from my earlier tweet. I don't believe ANYONE was 'outraged' by this completely charming video.

This is NOT journalism. https://t.co/CvZzlvETmW