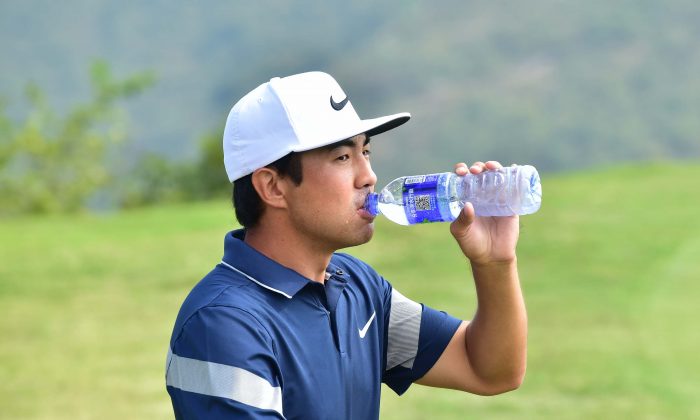 Alexander Kang takes a drink as he moves off the 10 Tee in round 3 of the PGA Tour China Series Clearwater Bay Open on Saturday Nov 5, 2016. Kang finished the day leading the field by 4 shots on 14 under par 196 total. (Bill Cox/Epoch Times)
Golf

HONG KONG—Alexander Kang of USA shot a 7 under par 63 on Day 3 of the PGA Tour China Series Clearwater Bay Open to move 4 shots ahead of the chasing pack going into the final round after carding 64, 69, 63 for a 196 total. Kang has been the leading position this year before and has held on to win – so his nerves are secure.

“I won by six earlier this year with a four-stroke lead [after 3 rounds], so here I hope I win by seven,” laughed Kang following his round. “The greens here are really perfect. The course is not that long, and I’m not the longest hitter. The par-4s are reachable, and my short irons have been good.”

Kang’s biggest test of the day may have been when he landed, with a difficult lie, in the greenside bunker of the 18th green, he blasted out to 7 feet and then holed the put for his 7th birdie of the round.

“I think my aggressive play has given me a good season this year. I also have a few missed cuts. But when I do make cuts, I’m in contention rather than coming in 20th or 30th. In professional golf, I think you would rather be aggressive than to play conservative because the money is usually top-heavy,” he added.

South Korean Daihan Lee also carded a 7-under par score for the day progressing from equal 16 overnight to join the final group on Sunday Nov 6, together with Kang and Xinjun Zhang. Zhang who also moved up the leaderboard as the day progressed finishing the day with a 6-under par and a 200 total for the 3-rounds.

This is uncharted territory for Lee who a consistent cut-maker but his best finish, in this his first season on the PGA Tour China Series, is a tied 9th place in May at the Wuhan Open.

Lee is currently lying 54th on the Order of Merit and needs a top top-50 finish at the end of the year to secure his place in the PGA Tour China in 2017.

“I’m just looking to move inside the top 50 on the Order of Merit so I can keep my card for next year,” Lee said. “That is my goal, and we’ll see what happens Sunday.”

Xinjun Zhang is a 2 times winner on the China Tour and has finished runner-up six times. Zhang lost the Henan Open in a playoff to Dou Zecheng and was again second in Beijing in September.

“Today my driving and my approach shots, I did very well, and I had lots of birdie chances even though I missed one on 18. I felt relaxed today. This course is so great,” said Zhang. “My aim is still to get into the top five on the Order of Merit and then get to the Web.com Tour.”

Daniel Pearce from New Zealand and Nisbet of Australia, are tied for fourth at 9-under, shooting a 64 and 65 respectively. Americans Sam Chien and Charlie Saxon are also at 9 under par.

Saxon has edged up the leaderboard after carding even par 70 on day 1. His scores on the par five 18th hole have been defining to his rounds. On day 1 he recorded a triple bogey, day 2 a birdie and today he sank a 40 foot putt for and eagle 3.

“Yeah, that eagle was big time,” said Saxon. “I would have been completely satisfied with birdie on that hole, so it was a huge bonus. All I was trying to do was two-putt, obviously.

“Eighteen is a really interesting closing hole,” he continued. “There can be some huge shifts in position on the leaderboard. You can make eagle like I did today or very easily make 8 like I did in the first round.”

Zheng Ouyang, Michael Skelton and Scott Barr, lying at T5/T6th overnight dropped away and are now on -4, -6 and -3 respectively. Dou Zecheng looks out of the race at -6 but carded an impressive -5 today – recording 8 birdies and 3 bogies.

The top 10 players all have a chance to win, but Kang has a solid 4 shot advantage which might be difficult for the others to bridge. The top 10 on the leader board are: Alexander Kang(-14), Daihan Lee (-10), Xinjun Zhang (-10), San Chien, Charlie Saxon, Daniel Pearce, Daniel Nisbet and Doyeob Mun (all on -9), and David Lutterus and Tian Yuan are on -8.