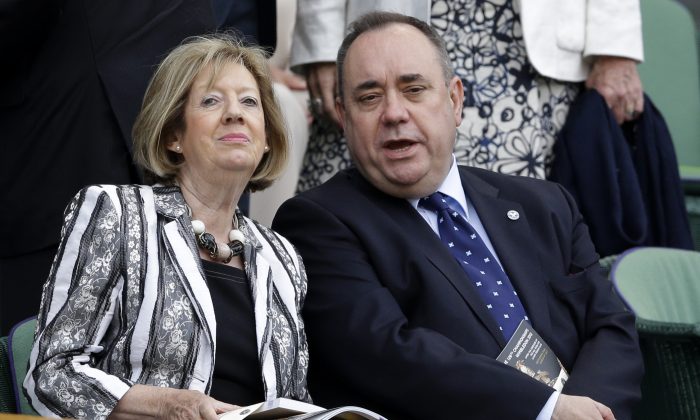 Alex Salmond’s wife, Moira Salmond, would be Scotland’s first first lady if the country’s “Yes” vote works out the way supporters hope it will.

Results from the referendum are scheduled to be announced at 7 a.m. GMT on Friday after a full day of voting on Thursday.

Moira, 76 or 77, has been dubbed Moira, Queen Of Scots, and often spends time in the hamlet of Strichen–population 1,200–instead of Bute House, the country’s equivalent of 10 Downing Street, reported the Daily Express.

I don’t think she’s madly keen on Bute House because you can’t move around in it as normal,” says Alan Taylor, editor of the Scottish Review Of Books who knows the Salmonds well.

“There’s always some kind of security guard or official person there so you can’t really relax in your own house.”

In Strichen the Salmonds own a four-bedroom converted mill on the banks of the Ugie river.

“I do get lonely when he’s away all week in Westminster,” she said shortly after her husband was first elected.

“So our time alone together is very precious. We drive up to Strichen on a Friday and like to potter around the cottage, having meals by the fire and a leisurely fry-up on a Sunday morning.”

Moira is a very private person, sometimes appearing with her husband in public but giving her last known interview back in 1990, according to the Independent. “Most people in Scotland have no idea what she looks like,” it remarked.

Apparently, in her first and last interview, “her greatest revelation concerned the inconvenience – familiar to MPs – of living in two places at once.”

“Sometimes I go to make a cheese-and-tomato toastie in Linlithgow, absolutely sure I’ve got a pound of cheese in the fridge, then I remember it’s in the fridge in Strichen!” she was quoted as saying. After Salmond was made fun of for a while, the couple decided that she wouldn’t give an interview again.

She did say in the interview that “I’m no Glenys Kinnock. I married Alex, not politics. That’s his life and I am happy to be in the background. I share his convictions, but one politician in the family is quite enough.”

The couple met while they both worked for the Department of Agriculture and Fisheries in Scotland. She was 17 years older than him, and his boss–he still lived with his parents. He moved out when they got married.

While she’s gotten a bad rap, friends insisted to the Telegraph that she is “chic and witty” and also smart and intelligent.

Salmond has been quoted as saying that she has “enormous grace and style.”

“She is invariably cheerful, optimistic, welcome and friendly, but determined to stay in the background,” wrote former diplomat Paul Henderson Scott in his memoirs.”She never speaks to the press or appears on a political platform, but it is apparent to everyone who has met her that Alex could not have a more sustaining ally.”

The couple seems to have fallen into the roles of a tradition marriage, with Salmond saying, reported the Scotsman: “Let’s just say I’m not inspired by doing household jobs. Moira gets on to me for spending a lot of time on other people’s problems and never having time for our own.”

Moira added that she does all Alex’s packing while always making sure he had enough shirts to last a week. “Sometimes I switch on the six o’clock news and I’m horrified by what he’s wearing,” she said. “He hasn’t a clue about the colours of ties, shirts and socks. He just puts on the nearest thing to hand.”

Salmond added: “Moira does stuff. She does events, races, dinners, all the things that a political spouse does – the most exacting and unrewarding profession you could have. It’s a lot of trouble for absolutely no reward whatsoever, but she does it gracefully and willingly.”