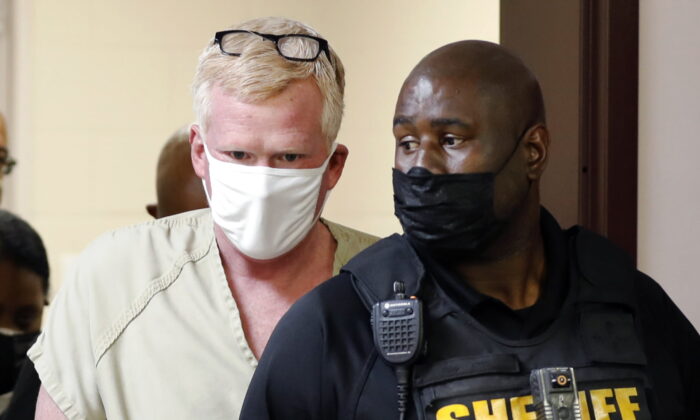 COLUMBIA, S.C.—Once prominent and soon-to-be disbarred South Carolina lawyer Alex Murdaugh has been indicted again, this time prosecutors saying his crimes extended to an eight-year money laundering and painkiller ring with a friend and former client charged with trying to help him commit suicide.

Murdaugh wrote 437 checks worth $2.4 million that Curtis “Eddie” Smith cashed over eight years, keeping some of the money for himself and giving the rest for wide-ranging illegal activities, according to indictments handed up last week and unsealed Tuesday.

That illegal activity included a “distribution network” for the painkiller oxycodone, according to prosecutors, who did not specify any of the other possible crimes. Both men were charged with possessing, manufacturing, or distributing narcotics, but court records did not provide additional details.

It’s the 16th indictment against Murdaugh on charges ranging from lying to police and trying to arrange his own death to stealing money from clients to arranging a $4.3 million in wrongful death settlements for a housekeeper who died in a fall at his home, then not giving her family a dime.

But still unsolved are the shooting deaths of Murdaugh’s wife and younger son outside their home in June 2021. Their killings are not referenced in any of the new indictments and both Murdaugh and Smith have adamantly said they had nothing to do with them.

Waters did not give any more details at Smith’s bond hearing Tuesday.

Murdaugh is also awaiting a formal order revoking his law license. He decided to not fight the state Supreme Court’s decision last week, which ends the legal career of a member of a prominent family that has dominated the legal scene in tiny Hampton County for nearly a century. Murdaugh’s father, grandfather, and great-grandfather were the area’s elected prosecutors for 87 years straight.

Murdaugh, 54, was charged in the latest indictments with criminal conspiracy and possessing, manufacturing, or distributing narcotics.

Most of the indictments were against Smith, who met Murdaugh when he needed a lawyer for a worker’s compensation suit. After his law firm discovered he was stealing money, Smith is the man Murdaugh said he called when he wanted someone to kill him so his surviving son could collect a $10 million life insurance policy.

Smith’s shot only grazed Murdaugh’s head on the side of a two-lane road last September, police said. Both men were charged last year in that incident.

Smith, 61, now faces four counts of money laundering, three counts of forgery, possessing, manufacturing, or distributing narcotics. trafficking in methamphetamine and other charges. Each money-laundering charge on its own carries up to 20 years in prison.

At his bond hearing Tuesday, Smith told the judge he was pulled into the scheme not by his own choice and he looked forward to clearing his name. His bond was set at $250,000.

Smith’s lawyer said he is not sure his client can afford it.

“We’re just going to have to wait and let more facts come out,” Jarrett Bouchette said. “As we’ve seen over the last year or so, things have changed over time that weren’t what they initially appeared to be.”

The indictments said Murdaugh wrote almost all the checks for Smith for under $10,000 to avoid federal requirements that banks report large transactions.

Smith forged the names of both his daughter and his girlfriend over the eight years he handled Murdaugh’s checks, prosecutors said.

Smith is the third associate and friend of Murdaugh to face criminal charges. The state grand jury also has indicted another attorney and banker, saying they helped Murdaugh take money from clients.

In 81 indictments against Murdaugh, prosecutors say he stole at least $8.4 million. He also faces a growing number of civil lawsuits.

Earlier this month, the anniversary of the June 7, 2021, deaths of Murdaugh’s wife, Maggie, 52, and son, Paul, 22, passed with no arrests and no additional information from the State Law Enforcement Division. Its agents have revealed little beyond the fact that the two were shot outside their Colleton County home and Murdaugh called 911, saying he discovered the bodies.

Murdaugh has said he was visiting his mother and ailing father when his wife and son were killed.

Murdaugh has been in jail since October on $7 million bond for the various financial charges.