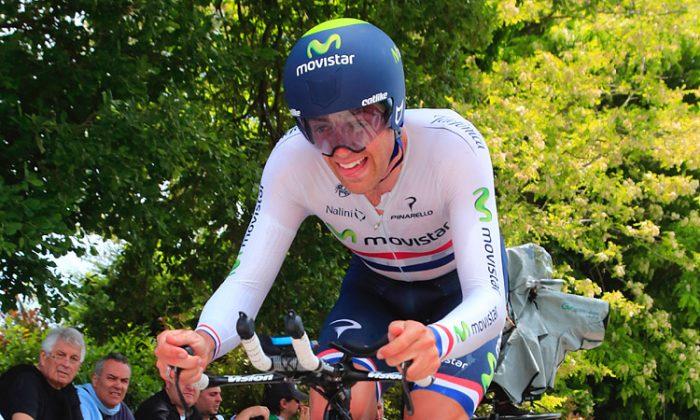 The 24-year-old Englishman went fast over the hilly first 35 km and while saving enough for the uphill finish, covering the course in 1:16:27, ten seconds faster than Sky’s Bradley Wiggins and 14 ahead of Astana’s Tanel Kangert.

The win was Dowsett’s first in a Grand Tour.

“It will take a bit of time before I realized what I have done, I still can’t believe myself,” Dowsett said on the team website.

“It was quite a harder TT than I expected; without a doubt, the hardest in my life.

“I took some extreme gears, a 55–29, to fight such different sections. The last climb seemed like it was never going to end, a cloud in my eyes as I believed I could never reach the finish.

“Before the start, getting into the best ten would have been enough for me, so being able to notch up the victory is amazing. The team had given me confidence to take things easy in the first week, thinking of this day.

“This was my goal, the day when I wanted to do my best. My personal ambitions are more than fulfilled with this victory, and from now on, my only duty will be working for my team mates. Beñat [Inxausti] lost a bit of time, but we will try to get him back close to the best overall again.”

Sky’s Bradley Wiggins likely would have won had he not suffered a puncture early in the stage. The 2012 Tour de France winner, a TT specialist, lost easily ten seconds getting a new bike, but even had he won the stage, he would not have significantly reduced his gap in the General Classification. Most of his GC opponents rode excellently, leaving the Sky team leader still 1:16 down in the standings.

Astana’s Vincenzo Nibali gave what might be the best time trial performance of his career to take fourth and the race leader’s pink jersey. He used his cornering and descending skills to make up time on riders like Wiggins who are usually much better in a time trial.

2012 Giro winner Ryder Hesjedal mismanaged his effort; the Garmin-Sharp rider lost time in the second half of the stage, and had to work very hard to make it up the final climb. He finished 18th on the stage dropped from third to sixth in GC.

Blanco’s Robert Gesink had a decent day, finishing 11th overall, 1:22 down on Dowsett, cementing the Dutch rider’s status as a serious contender. Gesink, fifth overall, has been poised to break out as a top-tier GC rider for a few seasons; the 2013 Giro might finally be his race.

There is only one more stage before Monday’s rest day, and it could be a good stage for action.

The two biggest climbs, the Cat Two Passo della Consuma and the Cat One Valombrossa, come halfway through the stage. After the descent from Valombrossa, the road is close to flat for about ten km before the Cat Four Vetta le Croci 20 km from the end. Immediately after the Vetta le Croci, the Cat Three Fiesole offers an excellent springboard for a late attack.

However, there are a couple of almost flat kilometers after the final descent before the road kicks up, riders who got a small gap on the downhill run could be caught by a charging peloton, setting up an uphill sprint finish.

Neither of the final two climbs is steep enough to create a selection among the GC contenders, unless the pace of the race is so high that one of them wears out. Only Hesjedal looked tired in the time trial, but all the leaders worked hard. One might be vulnerable.

A lot of things could happen in this stage. Because of the upcoming rest day, GC contenders might risk attacks, trying to shrink gaps or put time into their opponents. Astana might decide to defend the pink jersey, and ride down any attacks, or the team might let an attack get away and just ride to make time for team (and race) leader Vincenzo Nibali.

Nibali might attack on the climbs, or he might try to use his descending skills particularly on the final climb. Attacking on the final two climbs seems more reasonable.

Bradley Wiggins, over a minute down, is probably too conservative to make a move on this stage, but that might be the best reason for him to attack: he needs to make up time and no one will expect it.

This is the kind of stage where Sky, in the past, would have set a pace so high that everybody weakened, creating an opportunity for a stage win for Wiggins. However, it is still early in the race; most riders are probably still strong enough to hang with Sky, and Sky might not have the firepower, with Froome and Porte sitting out the Giro.

Ryder Hesjedal, who has already shown is willingness to attack, might use this stage to try to make up for his mediocre ride in Stage Eight.

However it unfolds, Stage Nine is likely to feature some exciting action.