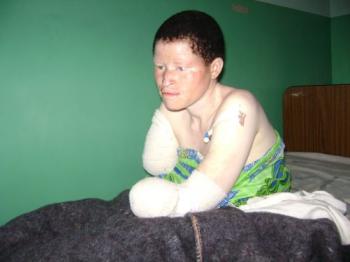 Peter Ash and MP Al-Shaymaa Kwegyir greet children at a school in which albino children have been staying to escape assailants hunting for body parts. (Don Sawatzky/Under the Same Sun)
Africa

Albinos Under Siege in Tanzania

By Joan Delaney
Print
For albinos in Tanzania, life is fraught with danger these days.

In a most gruesome trade that is fueled by superstition, poverty and greed, people with albinism are being hunted and butchered in this East African country for their body parts. The parts are sold to witch doctors who use them as ingredients in potions they claim will bring good luck and make people rich.

In the latest case, a 13-year-old albino girl was killed Monday when attackers pounced and severed her arms and legs as she was walking near her village. She was the 27th victim in under a year.

An investigative report by a BBC correspondent revealed that witch doctors, often regarded as supernatural beings in Africa, are behind the killings. They use hair, genitals, limbs, breasts, fingers, the tongue and blood to make so-called magic potions.

With many unaware that albinism is a genetic defect that causes a lack of pigmentation in skin, eyes and hair, superstition surrounding albinism is common and witch doctors play into this, says Vancouver resident Peter Ash. Ash is the founder of Under the Same Sun, an advocacy organization for people with albinism.

“The idea behind it is that albinos look different, particularly in Africa because it's not a Caucasian country, and 95 per cent of children with albinism are born to parents who are both black. You can imagine if you're black and all of a sudden you have a child who's whiter than most Caucasians and you have no idea that it's a genetic disorder.”

An albino himself, Ash spent 10 days in Tanzania in October where he met with government officials to advocate for the albino community and to raise awareness about the killings.

In Mwanza, the rural area that has the highest number of killings, Ash, who had security protection for the duration of his visit, met with the mother of a child who related to him the horror story of how her 10-year-old albino daughter had been recently killed.

The attackers broke into the family's hut during the night and corralled the children in one of the rooms. While her brother watched, the men slit the child's throat and drained her blood which they drank on the spot. They then hacked off her limbs and ran away.

“They'll get what they can and take off,” says Ash. “If no one's around, they'll usually take all the limbs and the head.”

To add insult to injury, after the torso of the victim is buried the attackers will often return and raid the grave for the bones and additional body parts. To prevent this, the graves have to be cemented over or the victims buried inside the home.

Tanzanian President Jakaya Kikwete has ordered a crackdown on those involved in the black market for body parts, and 173 witch doctors and five police officers have been arrested to date. Tanzania still has the death penalty (although it hasn't been used in 27 years), and Kikwete has said that anyone convicted of killing albinos will be hung.

However, no one has been prosecuted, and the situation is complicated by the fact that many police and politicians are clients of witchdoctors.

The BBC obtained evidence suggesting that police are involved in the racket, although the police have rejected this claim. Ash says police are extorting money from the witch doctors in return for not arresting them. It is believed that the witchdoctors in turn are blackmailing the police, threatening to make it known that they are using the witch doctors' services.

The ruthless killings have caused widespread apprehension in Tanzania's albino community, and those who can afford it are moving to urban centres where they feel safer. More than 60 albino children are currently staying at a school near Mwanza to ensure protection against assailants.

Hon. Al-Shaymaa Kwegyir, the country's first albino Member of Parliament, was appointed earlier this year to head up a commission regarding the attacks, a significant occurrence in that it's unusual for albinos to have positions of authority in Tanzania.

“I feel fear sometimes because these killers are hunting albinos like they are hunting for animals in the bush,” says Kwegyir. “We really live in threat. We are worried that we can be attacked any time.”

Kwegyir is working to create awareness of the killings at the national and international level. She has also been traveling to villages in rural areas — with security protection — and her efforts to show that albinos deserve respect are paying off, she says.

“People are now coming to understand that albinos are human beings like any other people. But the killers don't like it when I go to the villages because they know I am educating people.”

For hundreds of years in Africa albino babies were routinely killed — often at the behest of the parents — the belief being that albinos were European ghosts, a curse from the gods on the family, or that the mother had had sex with a white man.

While killing albino babies at birth is no longer practised, there is still widespread stigma and discrimination against albinos in Africa. In Tanzania, which has an unusually high prevalence of albinism, albinos are known by the derogatory name of zeru zeru, or ghost-like creature.

Because of a lack of the pigment melanin, albinos are sensitive to the sun and extremely vulnerable to skin cancers. They also suffer with eyesight problems and as a result fall behind in school and are often left with no way to make a living.

The killings are now spreading to the surrounding countries of Burundi, Congo, Kenya and Uganda, with the body parts being smuggled into Tanzania and sold there. It is believed that Tanzanian killers are beginning to prey on albinos in neighbouring countries because of the extra police scrutiny in Tanzania.

Ash plans to open a chapter of Under the Same Sun in Tanzania which will work with government officials and NGOs to advocate for the rights of albinos while at the same time giving them moral support to help them to “empower themselves.”

“My line when I was in Tanzania was, and still is, that my people are being hunted,” he says. “I'm not Tanzanian, but I've got the same genetic code they do, they're my brothers and sisters, and I can't help but feel personally attached to this.”