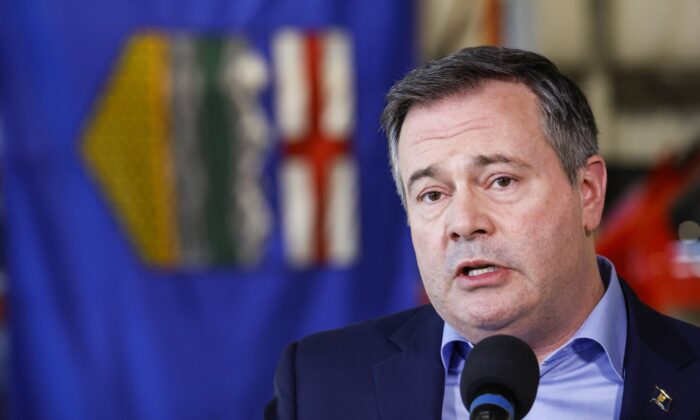 Premier Jason Kenney, in a speech to party members deciding his fate, told them he is an unblemished election winner who saved Alberta from servitude in a dystopian socialist hellscape.

“I know a thing or two about winning elections.”

The speech to the party formally launched what has become a fractious, acrimonious intraparty fight to determine whether Kenney should remain in charge of the United Conservatives.

Kenney has faced open dissent from some party and caucus members for more than a year, and he made it clear in his speech this vote must end the feuding one way or another.

“If the members decide they want to have a leadership election, I will step aside,” he said.

“But if the members decide that they want to choose the path of unity and stability … then I, and I believe all of our members, will expect every member of our caucus and our team also to respect the decision.”

Ballots will be mailed out this weekend to almost 60,000 party members. They must be returned by May 11, with results announced May 18.

If Kenney gets less then 50 percent plus one of the votes, a leadership race must be called.

Kenney’s critics say his policies coupled with an imperious, controlling management style have alienated supporters and sent popularity numbers plunging to the point the party could lose the next election to Rachel Notley’s Opposition NDP.

Kenney has labelled his opponents racial and religious bigots bent on dismantling his big-tent conservative coalition.

In his speech, he said decisions he had to make during COVID-19, particularly restrictions on personal freedoms, lit the powder keg of anger against him.

“I ask for your forgiveness if there were decisions that we made which you think were wrong or which offended you,” he said.

But he said now is not the time to fight past battles with the next provincial election just around the corner in May 2023.

Kenney reminded them he left his job as a Conservative MP to unite feuding conservatives under the new UCP in 2017 and then defeat the NDP in the 2019 election.

He characterized that 2019 campaign as a mission to stop “left wing ideologues who want to turn Alberta into some kind of socialist lab experiment” with an agenda he said had pulverized the economy, atomized jobs and sent thousands fleeing.

“I decided something had to be done,” said Kenney. “I knew if (the NDP) got a second consecutive term they would fundamentally change this province forever.

“We would lose this province as a beacon of hope.

“They would drive their toxic ideas into our schools, they would regulate and unionize everything that moves, they’d crush businesses with their class warfare politics of resentment, and they’d turn Alberta into a vassal state for (Prime Minister) Justin Trudeau’s Ottawa.”

The ballot question is simple: “Do you approve of the current leader? Yes or No.”

But the process has been tortuous as unhappy party members battled to mark a ballot and have their say.

But less than three weeks ago, after the membership cutoff date, the UCP board changed it to a provincewide mail-in contest.

The board said widespread interest—with 15,000 party members expected to make the trip to cast a ballot—made the one-day in-person option impossible.

Opponents, including UCP caucus member and Kenney opponent Brian Jean, said they worry the goalposts were moved to broaden the voting base because it had become clear Kenney would lose the in-person contest in Red Deer.

Jean, in statement, said, “Kenney’s rhetoric and approach have divided our party. The premier gave a speech that said the choice is between more of the same or Rachel Notley’s NDP.

“You know someone is losing when they resort to fear.”

Political scientist Duane Bratt, with Mount Royal University in Calgary, said Kenney’s demand of unity if he wins is easier said than done, especially if he gets a slim majority.

“No matter what the result is, I don’t know how this party stays unified.”