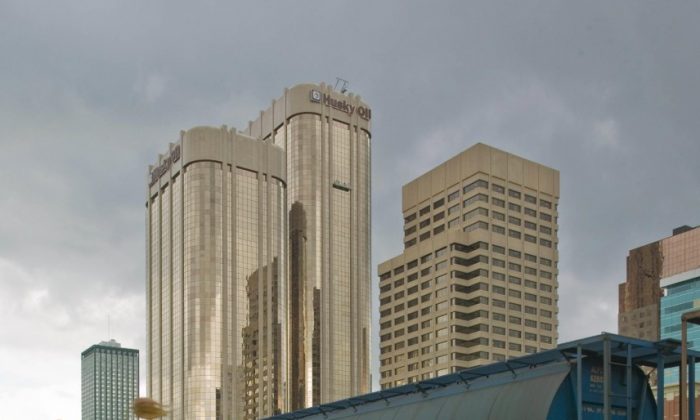 A freight train passes through Calgary’s city centre in front of the Husky Oil building. Alberta is undergoing an economic boom, forecast to continue throughout 2013. Meanwhile, business groups are calling on government to address acute labour shortages as a result of the rapid economic growth and oil development in the province. (David Boily/AFP/Getty Images)
Canada

Alberta’s economy is booming once again, with GDP growth reaching levels not seen since 2006, according to an RBC economic outlook.

“Alberta’s economy is firing on all cylinders, with real GDP growth in 2011 climbing above the four percent mark, the highest it’s been since 2006. We anticipate that this pace will be largely sustained over the next few years,” said Craig Wright, RBC’s senior vice-president and chief economist.

“Record levels of production and investment by Alberta’s oil industry are catalysts for the strong economic activity and every sign is pointing toward another banner year for this industry in 2012.”

The growth is largely being fuelled by massive investment in the oil sands. The Nation Energy Board estimates unconventional output alone will increase by a whopping 16 percent this year.

Conventional oil production is also seeing a revival, rising in 2011 for the first time since 2003, with further increases expected.

In addition, energy sector investments are slated to reach new highs in 2012. According to Statistics Canada’s most recent report on investment intentions, oil and gas firms plan to spend a record $48 billion this year on capital expenditures—an increase of 16.2 percent from 2011.

The Alberta government has forecasted there will be 114,000 more jobs than people to fill them in the coming years.

Earlier this month, a coalition of 19 Alberta business groups called on the federal and provincial governments to address labour shortages across western Canada.

“Governments and industry must work together quickly to explore opportunities to improve temporary worker and permanent immigration programs to meet the needs of a growing economy. Every sector of the economy will be hit hard by a shortage of workers.”

The Alberta Coalition for Action on Labour Shortages (ACALS), which was formed in late 2011 to seek action on labour shortages, recommends the government adjust temporary and skilled worker programs according to labour needs.

“In addition to ongoing efforts to maximize the opportunities for Canadians to benefit from our expanding economy, what’s needed now is the recognition that we must aggressively recruit in international labour markets. We will be more successful in this effort if the federal and provincial governments make the necessary changes to help employers gain access to the human resources we need,” said Tim Shipton, president of the Alberta Enterprise Group.

“We need to work together with all levels of government to implement real solutions.”

According to a survey conducted by the Canadian Federation of Independent Business, 46 percent of Alberta small business owners polled say the shortage of skilled labour is limiting their ability to increase sales or production.

The survey of 649 small business owners found 52 percent reported “poor quality applicants” as a result of the labour shortage and 33 percent complained of high turnover resulting in frequent re-training.