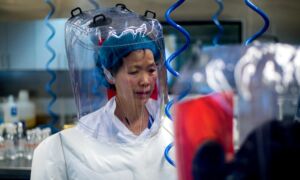 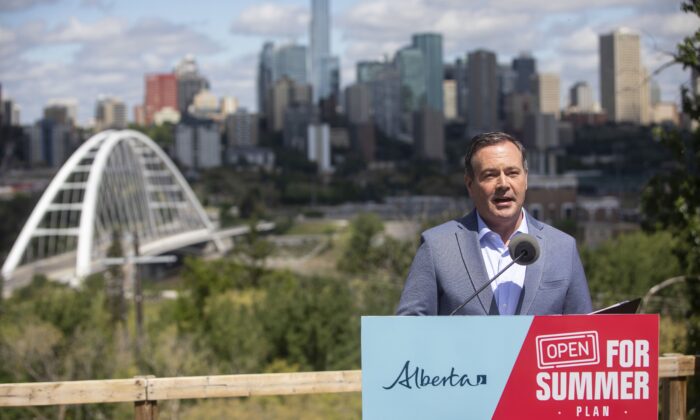 Alberta Premier Jason Kenney speaks about the Open for Summer Plan and next steps in the COVID-19 vaccine rollout, in Edmonton on June 18, 2021. (The Canadian Press/Jason Franson)
Viewpoints

When I heard that Alberta’s Chief Medical Officer Deena Hinshaw was doing her first press conference in nearly a month, I assumed that she was going to be announcing some tightening of COVID-19 restrictions in light of rising case counts.

My jaw dropped when Dr. Hinshaw essentially declared the pandemic emergency as being over and that the government would be ending all restrictions by mid-August. It was a bold declaration, and the uproar from opposition parties and medical activists was predictable and fierce. Demands for Dr. Hinshaw’s resignation were immediate, and “expert” predictions of doom for the province of Alberta flooded the airwaves.

While COVID-19 case counts have indeed been rising recently, hospitalizations and deaths have continued to drop. Over 75 percent of Albertans have had their first vaccination while 65 percent have had both doses. Vaccinations have been working as the medical community told us they would. While vaccination doesn’t provide 100 percent protection, it does reduce the severity of the infection and the potential damage caused.

The avoidance of overwhelming medical facilities has always been the main justification for government restrictions to try to reduce transmission. With hospitalizations being so low and decreasing, it only makes sense to pull back on restrictions.

Dr. Hinshaw made it clear in her press conference that while COVID-19 still poses a threat to some people, it is time to treat it as an endemic disease rather than a pandemic. We will have to learn to live with this disease until it runs its course, she said. This is a dangerous political gamble to make. If there is a resurgence of COVID-19 leading to significant deaths and pressure on the medical system, the government will be held directly responsible.

Premier Jason Kenney’s government is already floundering as far as public support goes. Recent polling indicates that support for the United Conservative Party (UCP) has dropped to 29 percent. This is a whopping loss of 21 percentage points since it was elected in April 2019, although it should be noted that the poll was taken just before Dr. Hinshaw’s announcement.

Kenney’s aggressive reopening plan is a political Hail Mary play. If hospitalizations remain low and manageable, the UCP government can take the credit for Alberta being the first province in Canada to return to normal. If this strategy fails, Kenney’s government will likely fail along with it as it will be painted as being reckless to the point of killing citizens.

There’s no doubt that every premier in Canada will be watching Alberta closely to see how well the ending of restrictions goes. Due to restrictions, commerce is still down while unemployment is up across the country. People are stressed and unhappy, and governments are running out of resources. Constant testing and restrictions have a cost, and every government wants this to end. Although somebody eventually had to do it, nobody wanted to take the chance and be the first to fully declare an end to the emergency. Kenney has now taken that burden upon himself, for better or for worse.

Many activists and politicians are in full fury mode over Alberta’s ending of restrictions and testing requirements. Outspoken doctor Joseph Vipond called for nothing less than a general strike in order to topple the government. Vipond organized a rally in downtown Calgary on July 30 that was supposed to become the seed of a revolution against the Kenney government. Although dozens of media members were present at the event, there were only about 100 attendees.

While activists may feel that it is time to take to the streets, average Albertans appear more cautiously optimistic, content to take a wait-and-see approach. For now at least, Kenney is safe from having to deal with a general strike.

The pandemic has had a polarizing effect. There are people who feel that the pandemic is a hoax and that we should never have done anything about it. There are others who take a zero-risk approach and feel that government should maintain restrictions until COVID-19 is totally obliterated. Neither approach is reasonable. The restrictions have arguably mitigated the harm that the pandemic presented, but now it is time for governments to face down the zero-risk folks and start returning us all to normal.

Time will tell soon enough if Premier Kenney’s decision was a brilliant move or a misstep. The genie is out of the bottle and we should all be hoping for success in reopening. Alberta is now Canada’s guinea pig as far as dropping pandemic restrictions goes. Only the most politically blinded of ideologues could hope that Alberta’s effort fails. One can support fully reopening no matter of which political stripe.

If Alberta wins in this gambit, we all win.