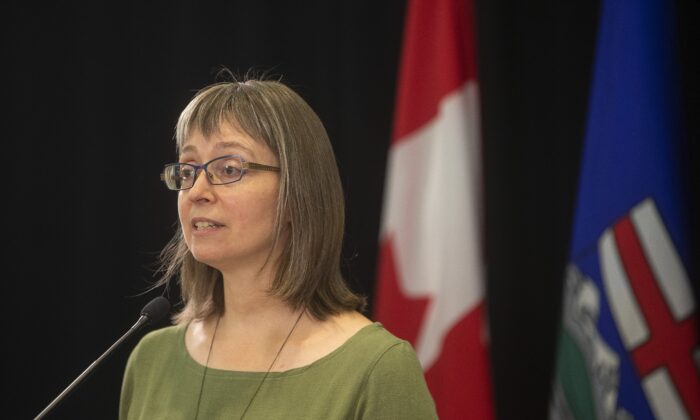 Alberta’s chief medical officer of health allegedly withheld evidence alluding to the possible dangers of mandating mask requirements for children, according to a new court application by the Justice Centre for Constitutional Freedoms (JCCF).

Deena Hinshaw, who has served as Alberta’s chief medical officer since 2019, allegedly received a memo in February 2022 from then-Premier Jason Kenney’s office stating a number of possible adverse health effects that children could suffer as a result of masking.

The Justice Centre, a legal advocacy organization, says Hinshaw withheld the memo’s evidence when she was cross-examined in an April court challenge questioning if her health orders violated Albertans’ Charter rights.

The government memo stated that masking children can “disrupt learning,” “interfere with children’s speech development,” and “impair verbal and non-verbal communication,” along with several other possible adverse health effects.

“During her cross-examination in April, Dr. Hinshaw was specifically asked whether she was aware of any evidence of harms to elementary school children from being compelled to wear masks,” reads a JCCF news release, to which Hinshaw “answered … in the negative.”

The Justice Centre further states that, based on knowledge obtained from the recently-released memo, Hinshaw’s “answers to this line of questions were false, and that she failed to disclose her knowledge of the harms to children from forced masking.”

Hinshaw admitted during her cross-examination that some of Alberta’s COVID-19 measures had “unintended consequences,” but “had to be weighed against the benefits of certain Non-Pharmaceutical Interventions,” according to the Justice Centre.

When questioned about the efficacy of masking and whether there was sufficient evidence supporting it, Hinshaw said it’s important to “look at the totality of that evidence,” and also said she believed masking to be a proven method of preventing the spread of COVID-19.

“Masks, when worn properly, are a valuable tool in reducing the transmission of [COVID-19],” she stated in a July 2021 affidavit, but then proceeded to say that “masking, on its own, is not sufficient to control the spread of COVID-19.”

The Alberta government memo also said that mandating masks for children can “interfere” with their social and emotional development and harm their “emotional signalling” and “facial recognition.”

“The Canadian provinces and the country as a whole have been under authoritarian-style rule by health officials for over two years,” JCCF lawyer Marty Moore said in a news release. “The ongoing scrutiny by the courts of the constitutionality of health official’s unprecedented power remains of the utmost importance to Canadians.”