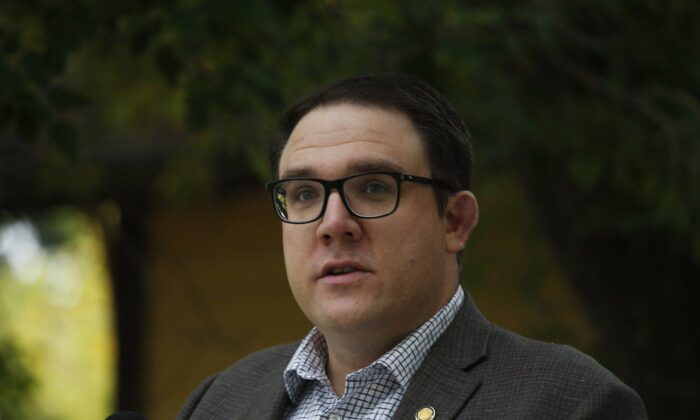 Jason Nixon is seen during a news conference, in Calgary, Sept. 15, 2020. (The Canadian Press/Todd Korol)
Canada

Alberta to Use $13.2B Budget Windfall to Pay Down Debt, Put Cash in Piggy Bank

Alberta’s finance minister says the government is going to use this year’s projected windfall budget surplus to pay down debt and put some cash in its piggy bank.

Jason Nixon says the plan is to make a $13.4-billion repayment on the provincial debt and add almost $3 billion to the Heritage Savings Trust Fund.

“We remain focused on using this surplus wisely to benefit Albertans today and tomorrow, paying down debt and reducing the amount of debt each Albertan carries,” Nixon told a news conference Wednesday.

Nixon made the comments as he revealed details of the first-quarter budget numbers for the 2022 fiscal year.

On Tuesday, Premier Jason Kenney announced the forecast for this year’s budget is no longer expected to be $511 million but $13.2 billion.

If the forecast holds until the end of the fiscal year on March 31, Alberta will reduce its taxpayer-supported debt to just under $80 billion—about $15 billion less than projected in February’s budget.

The extra money for the heritage fund will come from $1.7 billion of surplus money along with changes to legislation to keep another $1.2 billion in earnings in the account, bringing the total value to $19.6 billion.

The extra cash also allows the province to end a policy decision made in 2019 to de-index non-refundable income tax brackets and tax bracket thresholds.

A recent study by the University of Calgary’s School of Public Policy says the move effectively forced Albertans to pay almost $647 million more in taxes from 2020 to 2022.

Nixon said the tax change will be retroactive to the 2022 tax year and deliver about a billion dollars of relief by 2025.

In 2019, the United Conservative government also de-indexed payments to other social benefits, including Assured Income for the Severely Handicapped, better known as AISH.

Asked why the government wasn’t re-indexing those payments, Nixon said the programs are already among the most generous in Canada.

“When it comes to AISH, Alberta puts (in) 37 percent more than comparable provinces,” he said.

Alberta is riding another wave of financial prosperity due to high global oil and gas prices along with higher royalty payments from maturing oilsands projects.

Last year’s budget, crafted during the economic doldrums of the COVID-19 pandemic, predicted an $18-billion deficit but it ultimately ended up as a surplus of almost $4 billion.

In February, rising prices allowed the province to initially predict a $511-million surplus in this year’s budget dependent on the benchmark West Texas Intermediate oil price averaging US$70 barrel.

The province is now basing the budget on West Texas averaging US$92.50 a barrel.

Non-renewable resource revenue is expected to be $28.4 billion–the largest amount ever recorded in Alberta.

Total spending for the year is up slightly to $62.7 billion, while revenue is pegged at just under $76 billion.