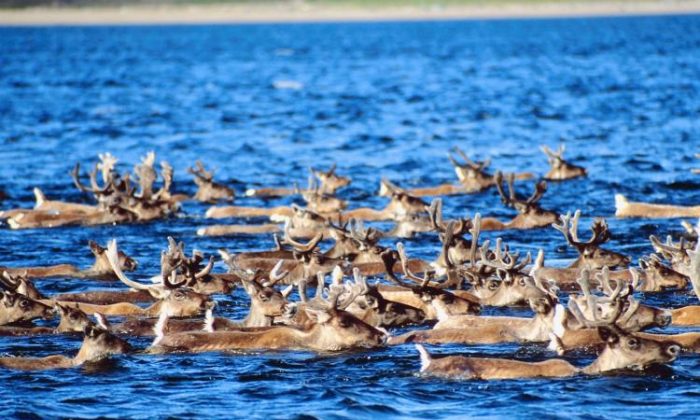 Migrating caribou swim across a river. The Alberta government has begun auctioning off 1,700 hectares of crucial caribou habitat to the energy industry. (Photos.com)
Canada

Alberta to Sell Off Land That is Habitat for Endangered Caribou

Herds in immediate danger of vanishing, report finds
By The Canadian Press

EDMONTON—The Alberta government is planning to sell off crucial caribou habitat to the energy industry just days after a federal scientific panel said the herds were in immediate danger of vanishing completely.

A federal scientific panel ruled earlier this month that those herds should be assessed as endangered, the highest level of threat available under Canadian law, because their numbers have tumbled by about 60 percent over the last decade.

“Most of it’s industrial disturbance,” said Justina Ray, one of the biologists who completed the assessment for Environment Canada’s Committee on the Status of Endangered Wildlife in Canada.

“There’s also pressure from recreational activities as well—everything from snowmobiles to helicopter skiing. The [factor] that has caused the greatest change is industrial disturbance.”

About 1,200 hectares on the block is on the range of the 78-animal Narraway herd. Data compiled by Global Forest Watch suggests more than 81 percent of that range is already disrupted. The other 500 hectares are from the 100-member Redrock-Prairie Creek herd’s range, about half of which has seen human impact.

The most recent figures for those areas are four years old.

Alberta Energy spokesman Mike Feenstra said the province does recognize mountain caribou as threatened, if not endangered. Temporary holds have been placed on lease sales on the ranges of two other boreal caribou herds, he said.

“Strict operating restrictions for industry continue to apply within Alberta’s other caribou ranges,” said Feenstra, who added that companies are informed of those restrictions before rights are purchased.

Carolyn Campbell of the Alberta Wilderness Association says those rules on how energy companies should operate on caribou ranges don’t go far enough; they don’t set disturbance limits and mostly deal with timing.

“It’s just going through the motions, to say there are restrictions on caribou range,” said Campbell.

The plants that grow back are much better habitat for deer and moose. Those animals are the main prey of wolves and, once the wolves gain access to an area, they start to eat caribou as well.

Saving mountain caribou herds is important for the overall genetic diversity of caribou in both British Columbia and Alberta, Ray said. She added that policy-makers need to consider that habitat pressures centred in Alberta are starting to spread.

“We’re noticing a creep northward of these pressures and the impacts as a result,” she said. “It’s a question of where to draw the line.”

Campbell pointed out that the federal and Alberta governments have a recovery strategy for boreal caribou that commits to restoring their range so at least 65 per cent of it is useable. A strategy for mountain caribou is in the works, but nothing has been completed.

The only thing that will preserve Alberta’s caribou herds is governments being willing to say no, said Ray.

“Given the difficult state of these populations, it will require both intensive management and it will also require some restraint of our activities,” she said.

“We can’t try and fix what’s happening with respect to their habitat without actually holding off with new disturbance.”