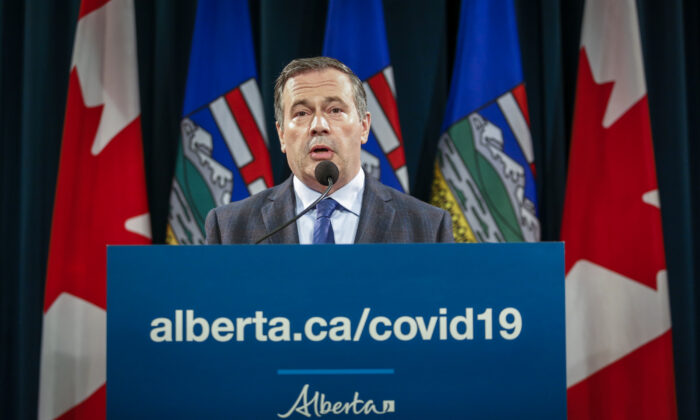 Alberta will announce a date to end its COVID-19 vaccine passport early next week, while Ontario says it will reassess its vaccine mandates in “the coming weeks and months.”

Speaking during a Facebook Live Q&A on Feb. 3, Alberta Premier Jason Kenny said his government intends to announce a “firm” date next week to end the province’s vaccine passport, with the actual cancellation date coming soon after.

“As COVID changes, our response to it must change as well,” Kenney told Albertans.

“That is why early next week, Alberta will announce a firm date to end the REP [Restrictions Exemption Program] and to do so in the very near future.”

Introduced last September, the REP is Alberta’s version of a vaccine passport that mandates anyone using non-essential services such as bars and restaurants to show proof of vaccination.

Kenny said that in the coming week the province will also announce a phased plan to drop almost all COVID-19 restrictions by the end of the month, provided the pressure on the hospitals continues to decline.

He reasoned that Alberta’s high vaccination rate coupled with stabilizing hospital patient numbers make the rationale for continuing the REP “not as strong today” as when it was first introduced last September.

“About 40 percent of patients with COVID in our hospitals are not actually there for COVID. They have incidental infections and so that is important context as well,” the premier said.

Ontario’s Chief Medical Officer of Health, Dr. Kieran Moore, echoed a similar sentiment when he spoke at a press conference on Feb 3, saying the current COVID-19 vaccine “doesn’t provide the sterile immunity” it did against the Delta variant.

Two doses of a COVID-19 vaccine don’t seem to significantly limit transmission of Omicron, though three doses decrease the risk of transmission by about 60 percent, he said.

Premier Doug Ford has said he is not considering updating the vaccine certificates in Ontario to mandate three doses at this time.

Moore said that, in the near future, Ontario should reassess the value of its vaccine certificates that require residents to show proof of two shots in order to access venues such as restaurants, gyms, and cinemas.

“I think those discussions will be happening in the coming weeks and months,” he said.

“We have to reassess some of the public health measures that we’ve put in place—reassess whether we maintain a proof of vaccination certification process given the decreased benefit against transmission.”