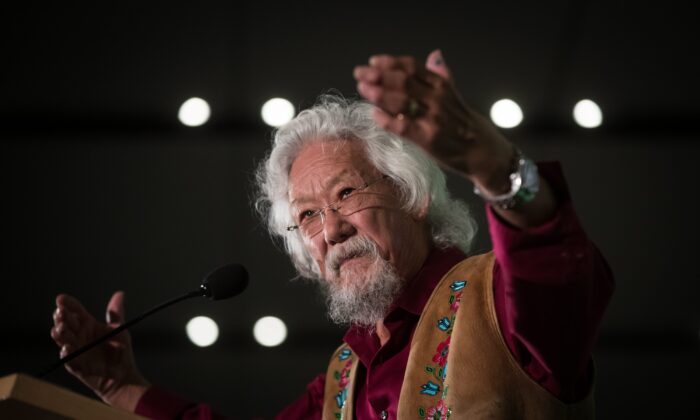 Environmental activist David Suzuki speaks during a rally for then Green Party Leader Elizabeth May and party candidates, in Vancouver on Oct. 19, 2019. (The Canadian Press/Darryl Dyck)
Canada

The Alberta government has introduced a motion condemning prominent environmental activist David Suzuki for his controversial comment that pipelines will be “blown up” if politicians fail to act on climate change.

The motion, tabled by Environment and Parks Minister Jason Nixon on Nov. 23, calls on the legislature to condemn Suzuki’s comment along with “any comments made calling for the intentional destruction of energy infrastructure” and “incitements of violent eco-terrorism.”

“But on top of that, we want to call today immediately for David Suzuki to apologize for what he said and to stop any remarks that can in any way be used to support eco-terrorism of any kind inside our country or anywhere,” Nixon said while presenting his motion.

Suzuki was at an Extinction Rebellion climate change protest in Victoria, B.C., on Nov. 20, where he spoke with CHEK News.He said that if politicians don’t do more to address climate change, there could be attacks on energy infrastructure.

“We’re in deep, deep doo-doo,” he said at the “Funeral for Future” protest that saw hundreds of people march from Centennial Square to the B.C. legislature demanding the provincial government declare a “climate emergency.”

“This is what we’ve come to. The next stage after this is there are gonna be pipelines blown up if our leaders don’t pay attention to what’s going on,” Suzuki said.

“I think statements like that are not helpful. I think that’s just not helpful at all,” Farnworth told reporters on Nov. 22.

Other officials expressed concerns that Suzuki’s comments could incite violence.

“This type of rhetoric is dangerous and undemocratic. It implies that energy workers and infrastructure should be targets for acts of terrorism. All political leaders should unreservedly condemn this statement,” Conservative Party Leader Erin O’Toole wrote on Twitter.

Alberta Premier Jason Kenney called Suzuki’s comment an “incitement to violence” that is “dangerous and should be condemned universally.”

“In Canada we resolve our differences peacefully and democratically, not with threats of terrorism or acts of violence,” Kenney tweeted.

In response to the outcry, the David Suzuki Foundation, an environmental non-profit headquartered in Vancouver, denied on Twitter any involvement with its co-founder’s comments.

“When David speaks publicly, he speaks on his own behalf—not for the David Suzuki Foundation,” said the post. “We have been in touch with David: he has confirmed that this comment was NOT a direct threat to destroy fossil fuel infrastructure.”

In a follow-up interview with CHEK News on Nov. 22, Suzuki clarified his earlier comments.

“We’ve come to a time where civil disobedience is what we have to do now—to put our bodies on the line—because if we don’t do this, then I fear what the next stage will be, which will be people will start to blow up pipelines,” he said.

He said it was “absurd” that people would think he was inciting violence, but he does not regret his remarks.

“No, of course not. I meant it. I said it. I regret that the media … would take the context of that article, which was a fine report, and put the headline then that totally slants it as if I’m inciting violence. It’s exactly the opposite of what I was trying to say.”

In a speech in the legislature on Nov. 23, Kenney said that due to Suzuki’s influence, it is crucial that his government address the issue.

“None of us are perfect, but to incite people to violence, even indirectly, I think is a whole other category.”