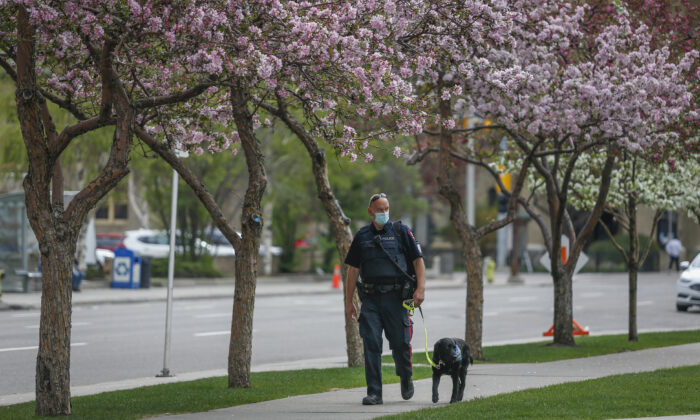 A police officer and a service dog walk past blossoming ornamental fruit trees during the COVID-19 pandemic in Calgary, Alta., on May 17, 2021. (The Canadian Press/Jeff McIntosh)
Canada

Alberta Reports Surge in Deaths Due to ‘Unknown Causes’ in 2021

Recent data on the leading causes of death in Alberta show a spike in the 2021 mortality rate due to “ill-defined and unknown causes.”

The data, published on June 30 by Service Alberta, ranks the 30 most common causes of death in the province last year.

The unknown cause of death category emerged on the list in 2019, previously it had not been included in the ranking list dating back to 2001.

Dr. Daniel Gregson, an associate professor specializing in infectious diseases and microbiology at the University of Calgary, told CTV News that the reasons behind the emergence of the unknown causes of death category last year are “probably multifactorial.”

He said those factors may include a lack of medical resources to determine the cause of death, delayed access to healthcare services, and post-COVID complications.

From 2015 to 2020, organic dementia was listed as the leading cause of death in Alberta with chronic ischemic heart disease the dominant cause from 2001 to 2014.

Among the other top causes of death listed were: malignant neoplasms of trachea, bronchus and lung (1,552), acute myocardial infarction (1,075), chronic obstructive pulmonary disease (1,028), diabetes mellitus (728), stroke (612), and accidental poisoning by and exposure to drugs and other substances (604).