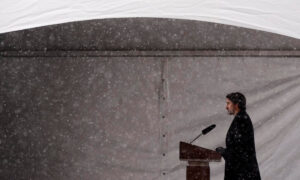 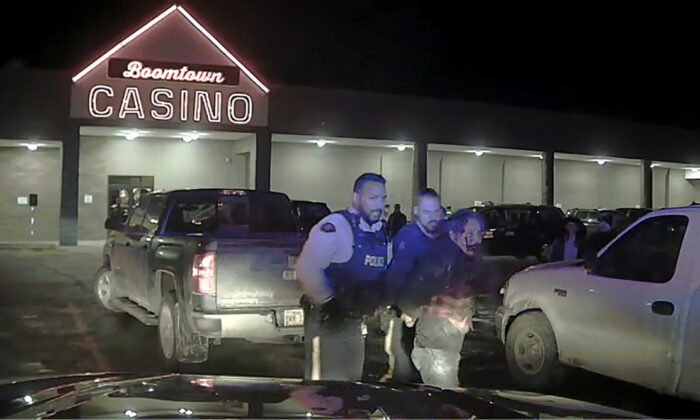 Chief Allan Adam of Athabasca Chipewyan First Nation is walked to a police vehicle during his arrest by RCMP officers in Fort McMurray on March 10, 2020, in a still from police dashcam video obtained during legal discovery. (RCMP via REUTERS)
Canada

An RCMP dashcam video shows how events unfolded when Chief Allan Adam of the Athabasca Chipewyan First Nation was arrested outside a casino in Fort McMurray on the early morning of March 10.

The video, filed as a court exhibit on June 11 in connection with the arrest and the events around it, shows an RCMP vehicle parked behind Adam’s truck, which is idling in front of the casino.

Adam exits his truck from the back on the driver’s side and walks toward the RCMP vehicle, walks back to his truck, then returns to the RCMP vehicle and begins swearing at the officer in the vehicle, telling him to tell his sergeant that “Chief Adam [expletive] tells you, ‘I’m tired of being harassed by the RCMP.’”

The police officer can be heard asking Adam to go back to his vehicle. Adam says, “Leave us alone! Don’t [expletive] stop behind us like you’re [expletive] watching us.”

Adam then walks back to his truck, grabs something from the back seat and puts it into the cargo bed, the walks back to the RCMP vehicle. The officer asks him to return to his vehicle repeatedly.

Adam walks away, then stands staring back at the police vehicle and says, “You and I are going to have a problem, right here, right now.”

Adam stands and stares at the police vehicle for almost a minute, then the officer walks up to Adam, says a few words, then goes to talk to Freda Courtoreille, Adam’s wife and the driver of the truck, while Adam eventually gets into the truck on the back passenger side.

Everyone eventually gets inside the truck, then Adam jumps out and confronts the officer, who grabs his left arm, while another officer runs up and jump-tackles Adam to the ground. Both officers pile on Adam, with one yelling “Don’t resist, don’t resist,” while Adam is heard saying, “What the [expletive] wrong with you guys.”

A few moments later, Adam, handcuffed and with a bloodied face, is pulled to a standing position by the officers and put in the police vehicle.

At a press conference on June 6, Adam said he was assaulted by RCMP officers when he was leaving the downtown Fort McMurray around casino at around 2 a.m. He said he fought to maintain consciousness as he was being hit in the back. “Blood was just gushing out of my mouth,” he said.

Wood Buffalo RCMP told CBC News that officers initiated a traffic stop on an idling and unoccupied vehicle with an expired plate at about 2 a.m.

“Allan Adam was one of the occupants who returned to the vehicle at which point a confrontation occurred,” police wrote in a statement to CBC. “During the incident, Adam was being placed under arrest and resisted. The members were required to use force to effect the arrest.”

Adam’s lawyer, Brian Beresh, told media on June 11, “This was a false arrest; there was no basis for it, and it was excessive force used.”

Adam has been charged with one count each of resisting arrest and assaulting a police officer. He is scheduled to appear in Wood Buffalo provincial court on July 2.

Meanwhile, Bill Sweeney, the director of law enforcement of the Alberta Serious Incident Response Team (ASIRT), told CBC that he has ordered an investigation because Adam’s allegation may be criminal in nature. “We thought it was in the best interest to have ASIRT conduct the investigation,” he said.