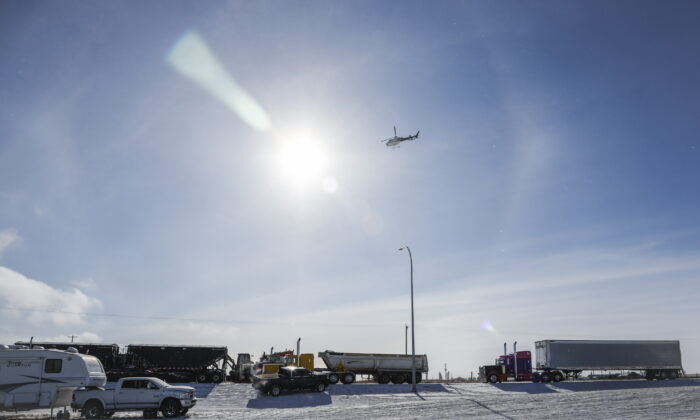 An RCMP helicopter flies over as a truck convoy demonstrating against COVID-19 mandates continues to block the highway at the U.S. border crossing in Coutts, Alta., on Feb. 2, 2022. (The Canadian Press/Jeff McIntosh)
Canada

RCMP said they have arrested 11 people at the Coutts border crossing protest in southern Alberta.

In a news release on Feb. 14, the Mounties said they received information in the early morning that a “small organized group” within the larger Coutts protest had access to a cache of firearms and ammunition.

The officers conducted an investigation to evaluate the threat level before executing a search warrant, the RCMP said.

The police searched three trailers believed to be linked with the small group. In total, 11 people were detained by the officers, and 13 long guns, handguns, multiple sets of body armour, a machete, a large quantity of ammunition, and high-capacity magazines were seized.

The Mounties added that a large farm tractor and a semi-truck, both involved in the blockade, attempted to ram a police vehicle on the night of Feb. 13. An officer in the vehicle was able to reposition and avoid a crash, the release said.

The protest at Coutts border crossing started on Jan. 29. It is one of several demonstrations inspired by the Freedom Convoy encamped in Ottawa, which started in opposition to the federal government’s vaccine mandate for cross-border truck drivers.

The first convoys converged in Ottawa on Jan. 29, and many protesters have indicated they will stay until all COVID-19 mandates are lifted. Since then, the movement has mushroomed to include supporters from across the country who oppose all pandemic mandates and restrictions imposed by governments.

In a statement on Jan. 26, Tamara Lich, co-organizer of the Freedom Convoy, urged convoy members not to tolerate violence or vandalism and to report the truck number and licence plate of anyone inciting violence or hatred. She also said attempts by critics to characterize the truckers as extremist in nature were tactics used to smear the campaign.