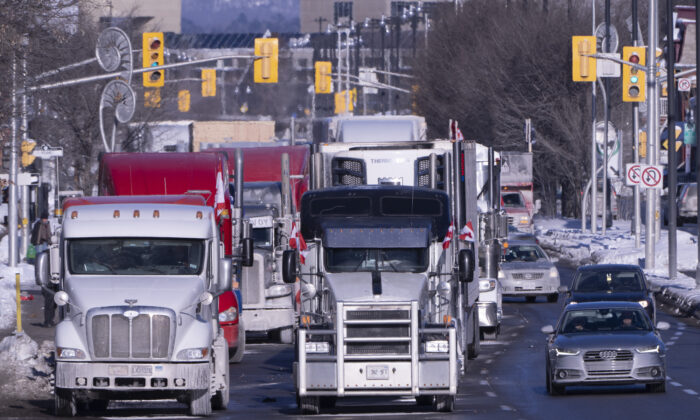 Trucks from the convoy protest against COVID-19 mandates and restrictions are parked on a road in Ottawa on Jan. 30, 2022. (The Canadian Press/Adrian Wyld)
Canada

A trucker convoy continues to block a highway at a busy Canada-U.S. border crossing for a second day as part of a national protest against COVID-19 mandates and restrictions.

The Canada Border Services Agency (CBSA) said the border crossing at Coutts, Alta., has remained open despite the blockade on Highway 4, but the RCMP says only foot traffic is able to get through.

The convoy, which set up the blockade on Saturday, Jan. 29, is one of many in Canadian towns and cities held this weekend to coincide with the large-scale demonstration in Ottawa protesting the federal government’s COVID-19 mandates and restrictions.

The Alberta RCMP issued a travel advisory on Jan. 29 for Highway 4 from south of Lethbridge, Alta., to the village of Coutts. The advisory remained in place on Jan. 30 and may continue for “an unknown period of time,” the RCMP said.

Alberta RCMP are issuing a travel advisory against travel in the area of Hwy 4 south of #Lethbridge continuing to the #Coutts border crossing due to heavy congestion and slow moving traffic. This is expected to continue for an unknown period of time. #ABRoads

The Alberta protest is being held in support of “Freedom Convoy 2022,” a cross-country demonstration that arrived in Ottawa on Jan. 29, having started out as a protest against the feds’ COVID-19 vaccine mandate for truckers that took effect Jan .15.

The cross-country convoy soon expanded into a national movement, with thousands of supporters joining to support the truckers as well as protest against other pandemic-related restrictions.

The Alberta RCMP had asked the participants of the convoy on Highway 4 to avoid a full blockage of the highway so as not to restrict or prevent responses to emergency events such as a fire, collision, or medical emergency.

“The RCMP’s goal is that traffic flow remain open in at least one lane in each direction to allow for emergency response, flow of traffic for area residents, employment travel, and to permit movement of lawful traffic across the border.”

The CBSA said it has been monitoring the situation at the border and is “ready to respond, with police of local jurisdiction if necessary, to any events impeding operations at ports of entry,” a spokesperson from the agency told CBC News.

Alberta Premier Jason Kenney called for an immediate end to the blockade in his province, saying that it violates Alberta’s Traffic Safety Act.

“As I said last week, Canadians have a democratic right to engage in lawful protests. I urge those involved in this truck convoy protest to do so as safely as possible, and not to create road hazards which could lead to accidents or unsafe conditions for other drivers,” Kenney said on Jan. 30 in a statement from Washington, D.C., where he is attending a National Governors Association meeting.

Another group of protesters also blocked traffic crossing the Canada-U.S. border between Woodstock, N.B., and Houlton, Maine, on Jan. 29 beginning at noon.

Protest organizer Mitchell Albert of Moncton said the blockade would be in place until noon the next day.

“The plan is to show the N.B. government and the government of Maine what we can do when we stick together, and we will close that border down for 24 hours,” Albert told The Canadian Press.