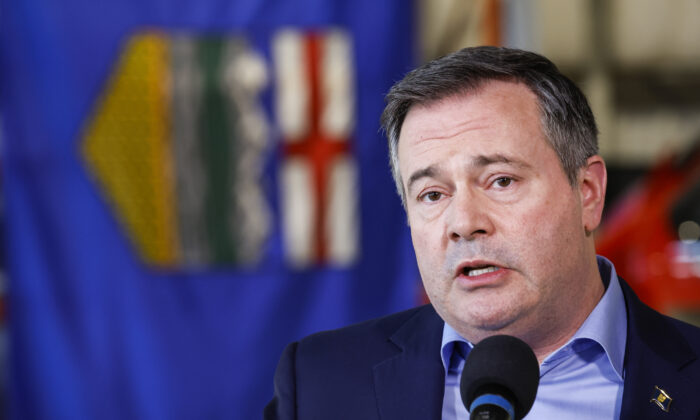 Alberta Premier Jason Kenney said he has been interviewed by the RCMP as part of an investigation into potential criminal identity theft during the 2017 United Conservative Party leadership election.

“Yes, I did an interview at [their] request,” he said in a press conference on March 28.

“We’ll always be there to cooperate in any investigation. At the end of the day, my campaign did everything it could to carefully follow all of the rules, and I’m confident we did so.”

The RCMP has interviewed several of Kenney’s cabinet ministers as they look into possible voter identity fraud. No charges have been laid so far.

The investigation is one of the two related to the 2017 UCP leadership contest.

The RCMP has also taken over investigation from Alberta’s Office of the Election Commissioner into allegations of irregular financial contribution to the campaign of another UCP leadership candidate Jeff Callaway, who dropped out of the race halfway and turned to support Kenney.

Following CBC’s March 23 report of two insiders’ court affidavit allegations that Kenney was in the room when Callaway’s illegal contributions were discussed, the premier was asked on March 28 if he was aware of the unlawful disbursements.

“No, absolutely not,” Kenney said.

“To the contrary, while I sought Mr. Callaway’s endorsement … I never offered and he never received from me or anybody in my campaign, any fundraising assistance. Period. Full stop.”

Kenney also questioned the legitimacy of two sources cited by CBC in court affidavits, alleging that Kenney was in the room when Callaway’s campaign contributions were discussed. Kenney said the sources themselves have been fined for Callaway fundraising irregularities following an investigation by the Chief Electoral Officer.

The question of irregular contributions has resurfaced given changes announced last week to the vote to determine Kenney’s fate as party leader.

The leadership review was planned to be an in-person ballot on April 9 in Red Deer, but the party’s executive changed that, claiming a dramatic increase of 15,000 registered party members made an in-person vote impossible, and it was switched to a mail-in ballot that opened the vote up to all party members.

Jean and the citizen advocacy group Take Back Alberta have spent weeks soliciting people to sign up for membership to vote against Kenney. They say they plan to ask the elections commissioner to investigate.

Kenney’s organizers dismiss the allegations. The UCP executive also rejects allegations from Jean and Take Back Alberta that the party set up an illegal web portal for Kenney’s team to register voters.

“[Jean’s campaign manager] knows that membership portals are routinely created for candidates selling memberships. We created one for him to use for Brian Jean’s nomination,” UCP spokesman Dave Prisco said in a statement.

Jean won a recent byelection under the UCP banner despite his platform to challenge Kenney for its leadership. He won’t be sworn in until April 5 and his team isn’t sure he’ll be allowed to sit in Kenney’s caucus.