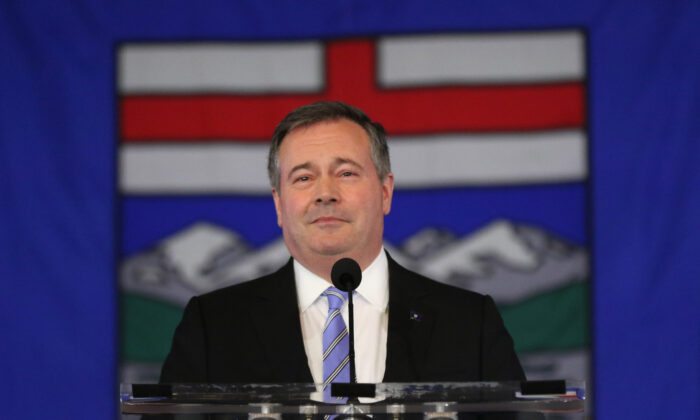 Alberta Premier Jason Kenney speaks in response to the results of the United Conservative Party leadership review in Calgary on May 18, 2022. (The Canadian Press/Dave Chidley)
Canada

Alberta Premier Jason Kenney will remain in office until a new leader is elected to take the helm of the United Conservative Party (UCP).

A day after Kenney announced his resignation, the UCP caucus met on May 19 and agreed that the premier should remain in the job until a leadership race can select his replacement.

“Today, the United Conservative caucus had a vigorous discussion and debate about the future of our party and our government,” said UCP Caucus Chair Nathan Neudorf in a press release following an all-day meeting at McDougall Centre in Calgary.

“We have affirmed Premier Jason Kenney’s continued leadership of our caucus and government until such time as a new leader is chosen, the timing of which will be determined by the United Conservative Party.”

Kenney did not issue a statement or speak to reporters but posted a letter on Twitter he addressed to party secretary Janis Nett, stating he will step down “upon the election of a new Leader.”

Kenney announced his departure on the night of May 18 after receiving 51.4 percent support in the leadership review by party members. Technically, the total was enough for him to stay on the job, but the premier said the mandate was not strong enough.

“While 51 percent of the vote passes the constitutional threshold of a majority, it clearly is not adequate support to continue on as leader,” Kenney said in a speech in Calgary following the announcement of the results.

“I’m sorry, but friends, I truly believe that we need to move forward united, we need to put the past behind us and our members. A large number of our members have asked for an opportunity to clear the air through a leadership election.”

“While we have our internal differences we must remember the shared values that unite us as conservatives,” he added.

There has been growing open discontent by segments of Kenney’s caucus and party over his leadership and COVID-19 policies.

In an attempt to quell mounting dissatisfaction, Kenney agreed months ago to move up the planned leadership vote from this coming fall to April 9.

Brian Jean, who won the Fort McMurray-Lac La Biche byelection in March, said the “healing process” can only start when the premier leaves his post.

“He knows that. We know that and we need to start the renewal process of the UCP,” Jean told The Canadian Press on May 19.

Former Wildrose Party leader Danielle Smith, who recently announced her bid to replace Kenney, said she doesn’t have any objections to Kenney staying on as premier until a new leader is elected.