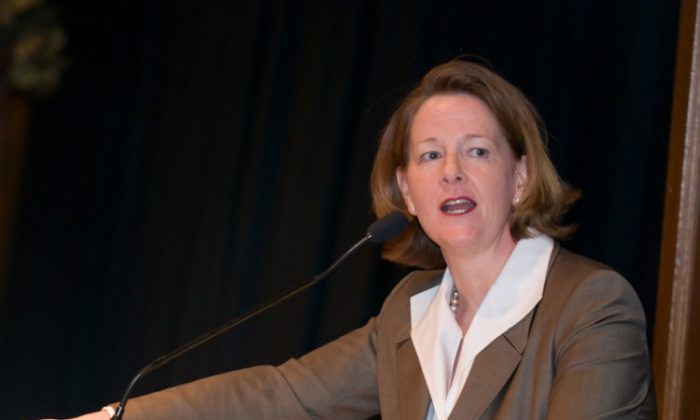 Alberta premier Alison Redford. The Wildrose Party says Redford's government was too preoccupied with damage control over scandals during the fall session to govern effectively. (Courtesy Government of Alberta)
US

Although the Alberta government is declaring the fall legislative session a success, opposition parties say the session was one of the most dysfunctional in recent memory.

In recent weeks, there has been a call for Premier Alison Redford to step down and a mass walkout by the Official Opposition during question period.

A recent statement on the fall session released by Redford highlighted her government’s successful passing of 10 new pieces of legislation that focused on “improving accountability, openness and transparency across government,” as well as managing natural resources, protecting home buyers, and improving education.

“Albertans expect us to focus on their priorities and to build and invest in Alberta’s future. I am proud to say that we have done just that,” Redford said.

But opposition parties say the Progressive Conservatives were too caught up in damage control from continuously breaking scandals to govern effectively.

“Throughout the session, while the PC government was adding to its $3 billion deficit and getting caught in a myriad of ethics scandals hitting the premier’s office, the Wildrose Official Opposition carried a total of 61 percent of the debate in the house compared to only 16 percent for PC MLAs,” said Wildrose leader Danielle Smith in a press release.

Zwozdesky cleared Redford of allegations she deliberately misled the house about her role in awarding the contract.

In the latest scandal, PC Tourism minister Christine Cusanelli was forced to pay back $10,600 for 31 items she expensed during a trip to the London Olympics, including airfare tickets for her mother and daughter.

In late November, Mason called for Redford to step down as premier until the ethics commissioner could complete an investigation into the tobacco lawsuit.

“I think Albertans should have serious concerns about the integrity of the Redford government,” said Mason. “It has raised avoiding accountability to a fine art.”

Opposition parties have also complained of a lack of debate on new Tory legislation introduced during the session—of the 106 amendments put forward by the opposition, the government voted down all but two.

The Wildrose and NDP also publicly complained of Redford’s frequent absences from the legislature; she was absent from about half of the question periods since the spring. Wildrose even put out a faux wild west-style “wanted” poster on the premier, humorously highlighting the issue.

“I think people expected something quite different from the Redford government then we’ve seen so far,” says Ian Urquhart, associate professor of political science at the University of Alberta.

“Certainly the appeal of the premier in some quarters was the fact that she was going to steer the party down a more moderate path—I don’t believe we’ve seen that in terms of legislation at this point in time.”

Urquhart said the PCs didn’t have much control during the fall session “because of the information coming out that put them on the defensive.”

“Ever since late October the premier has been essentially defending herself and her party in the legislature almost on a daily basis,” he said.

Redford has said the fall session was characterized by political posturing and “unprecedented personal attacks” against her by the opposition parties.

Urquhart said opposition parties had no choice but to bring up the scandals during question period, and generally “did a good job” in their role of making the government accountable.

But he says the most disappointing part of the session was that Albertans didn’t play a stronger role in holding their government to account, especially after the funding scandals emerged.

Redford did not respond to interview requests in time for publication.