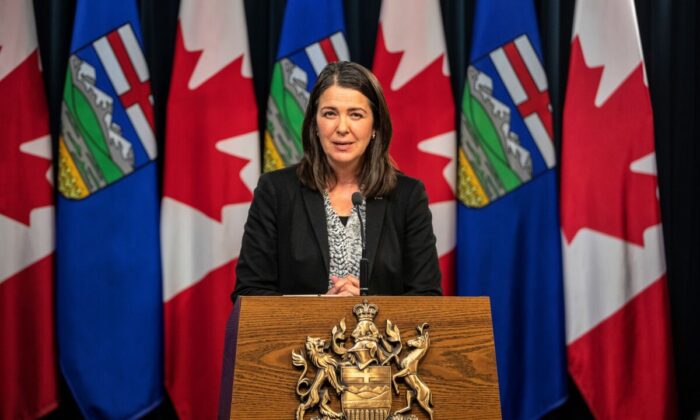 The Alberta government, in a late-night session of the provincial legislature, voted 27-7 to pass the Sovereignty Act, with amendments that clarified any changes made to laws have to return to cabinet for debate.

The bill moved to a third and final reading and was approved at 1 a.m., with all of the United Conservative Party voting in favour, and the opposition NDP party voting against it at all three readings, after nine hours of debate on the bill at second reading.

“There has been plenty of time for members to speak,” Schow said during the second reading, noting the Bill received 18 hours of debate.

“There comes a point when the same message gets repeated over and over,” said Schow.

Bill 1, Alberta Sovereignty Within a United Canada Act, the first legislation introduced since Danielle Smith was elected premier, generated both praise for its stated purpose of providing a “constitutional shield” against overreach by Ottawa, and suggestions that the bill is unconstitutional and undemocratic.

The act’s stated purpose is to “protect Albertans from federal legislation or policies that are unconstitutional or harmful to our province, our people or our economic prosperity.”

Premier Danielle Smith said during debate over the bill, “It’s not like Ottawa is a national government.”

NDP leader Rachel Notley tweeted after the bill had passed, “The UCP has cut off debate on the job-killing, unconstitutional Sovereignty Act and voted it through the Legislature at 1 a.m. on a Thursday morning.”

“And, yes, for the record, if we form government, we will move to repeal this horrible, anti-democratic legislation,” said Notley.

First Nations Chiefs raised concerns with the bill, with some suggesting it could infringe on indigenous rights.

Rick Wilson, Alberta’s indigenous relations minister told reporters that Bill 1 specifically states treaty rights will be respected, and the government will listen to concerns and work to address them.

Legal experts who spoke with The Epoch Times say the bill is constitutional.

Alberta lawyer Leighton Grey says criticism of the bill “comes from a place of profound ignorance about the precise legal structure of Canadian federalism.”

“The federal government has certain specific areas of authority,” Grey said. “Similarly, the provinces are sovereign within their own exclusive areas of jurisdiction. That is how a federation is intended to work.”

Bruce Pardy, executive director of Rights Probe and a professor of law at Queen’s University, says Bill 1 is a sign that “Alberta is not satisfied with the way the Canadian federation is working.”

He said the federal government should not take cooperation with the province for granted. Pardy adds that the “real value” of the bill is perhaps political, drawing comparisons with Quebec.

“Quebec has received all kinds of favourable treatment from Ottawa since it asserted its uniqueness and dissatisfaction with the constitutional order. For years, Alberta arguably has received the short end of the stick from Ottawa. There’s no reason why they shouldn’t rattle the cage,” says Pardy.