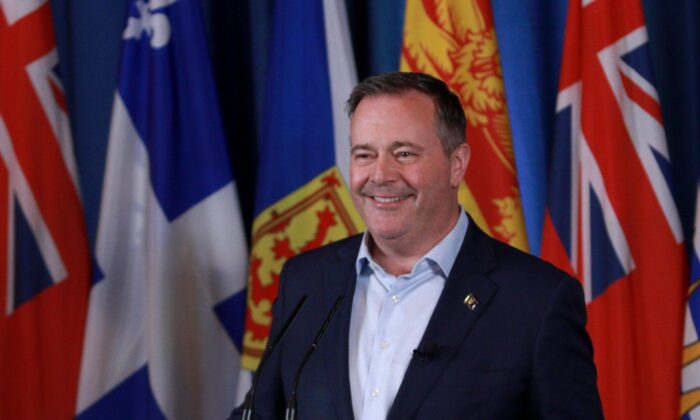 Alberta on Track for $13.2B Surplus, Kenney Says Ahead of Fiscal Update

Alberta Premier Jason Kenney says the province is on track for a $13.2-billion surplus in this budget year.

It’s an exponential escalation from the $511-million surplus forecast when the provincial budget was introduced in February.

“Of course, a lot of that is thanks to the growth of commodity prices and royalty revenues,” Kenney, who is currently on a government trip to South Korea, said Tuesday in a video posted on Twitter.

“But fundamentally we never would have had a balanced budget on the books this year had it not been for getting our spending under control and broader growth in Alberta’s economy.”

The province is riding another wave of financial prosperity due to high oil and gas prices, along with higher royalty payouts from maturing oilsands projects.

Finance Minister Jason Nixon is slated to release further details Wednesday on the province’s finances for the first three months of this fiscal year.

Kenney said the windfall would allow the province to re-index non-refundable income tax brackets and tax bracket thresholds to inflation starting this year.

He said that means the average Albertan would see a $300 benefit and a $300 million cost to the treasury.

Kenney’s government was heavily criticized for de-indexing the brackets in 2019 after promising to not punish Albertans with more taxes.

A recent study by the University of Calgary’s School of Public Policy says the move effectively forced Albertans to pay almost $647 million more in taxes from 2020 to 2022.

“We never wanted to de-index the system in the first place,” Kenney said in his video statement.

“But we had to get the province’s finances in order and do so without cutting health care.”

Alberta’s economy has ridden the highs and lows of fickle oil prices fordecades, with prices bottoming out during the COVID-19 pandemic.

As prices rebounded, the province tabled a budget this year that forecast a $511-million surplus dependent on the benchmark West Texas Intermediate oil price averaging US$70 barrel.

West Texas has been much higher than that, averaging more than US$100 a barrel over the first six months of this year, and now sits in the mid-$80 range.

Last year’s budget, crafted during the economic doldrums of the COVID-19 pandemic, predicted an $18-billion deficit but ultimately ended up as a surplus of almost $4 billion.