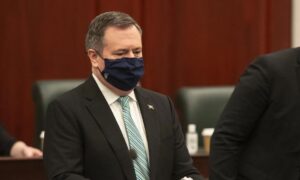 Next Step on Alberta Pension Plan in Spring, but No Change Without Referendum: Kenney
0
Share Now
TelegramFacebookTweetEmailTellMeWeReddit
Copy Link 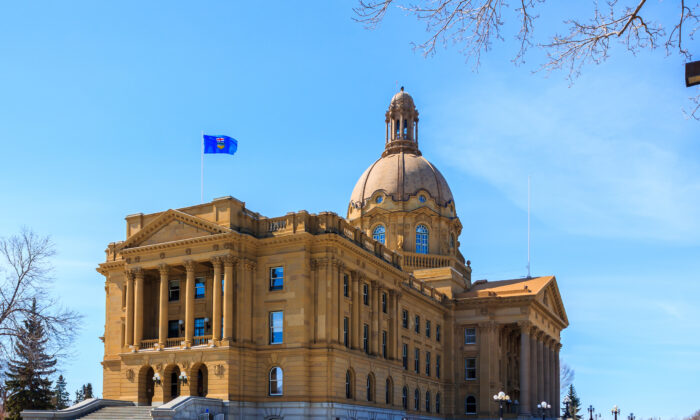 The Alberta legislature in Edmonton in a file photo. (Achinthamb/Shutterstock)
Canada

Albertans will vote in a referendum on equalization this fall if the provincial government’s motion to debate and approve the referendum question gets passed. But it’s an exercise some pundits say will be more likely to influence provincial politics than the Canadian Constitution.

The question proposed for the ballot in the Oct. 18 municipal elections is, “Should section 36(2) of the Constitution Act, 1982—Parliament and the government of Canada’s commitment to the principle of making equalization payments—be removed from the constitution?”

Theoretically, an overwhelming “yes” vote would trigger constitutional discussions. In 1997, the Supreme Court of Canada declared that if a “a clear majority … on a clear question” votes in a provincial referendum to amend the Constitution, then the federal government and all of the other provinces have “a constitutional duty to negotiate” the issue “in good faith” with the province concerned. The ruling was made in the context of the 1995 Quebec referendum to secede from Canada.

However, Jared Wesley, a University of Alberta (UA) political science professor, said in an interview that he expects this year’s municipal elections will see a continuation of low voter turnout, making a strong mandate unlikely.

“They picked the municipal elections in order to hold the referendum, which historically has been very low in Alberta, as if they get more than 40 percent turnout, it’s a banner year,” Wesley said.

He predicts that about “one in four Albertans will say they want to get rid of it [equalization]. Hardly an overwhelming mandate to then hop on a plane, go to Ottawa, and try to negotiate a fair deal for Alberta.”

A poll conducted in March by Common Ground, a UA-based research institute, found that 61 percent of Albertans think Canada’s equalization system is unfair to Alberta. When asked if equalization should be removed from the Constitution, 43 percent agreed, 20 percent opposed, and 37 percent were neutral.

Geoffrey Hale, a political science professor at the University of Lethbridge, told The Epoch Times that the pandemic is still dominating politics. As a result, it’s hard to gauge how much attention Albertans are paying to the referendum question, “or whether they will be dealt with on their merits or as a reaction to the performance of the Kenney government,” Hale said.

“The Kenney government is politically vulnerable, with sizeable elements of both traditional PC [Progressive Conservative] and Wild Rose support alienated to varying degrees,” he added.

“As Alberta has no power to do anything unilaterally about equalization, and the historical beneficiaries of the system are close to a constitutional majority of provinces, it’s hard to tell how much traction the referendum will get under current circumstances.”

A 2020 paper by Thomas Courchene and Teresa Courchene, written for the Macdonald-Laurier Institute, found that in 2018–19, Alberta had own-source revenues per capita of $9,597 and received no equalization payments at all. In contrast, Quebec had $10,694 per capita but received an additional $1,392 per Quebecer, or a total of $11.7 billion, through equalization. In 2019–20, Quebec’s equalization increased to $13.1 billion, and again fiscally challenged Alberta received nothing.

This is partly because the equalization formula is based on three-year moving averages of provincial per-capita revenues that’s calculated with a two-year lag. Thus, according to that formula, Alberta’s revenues for those two years were much higher than its actual revenues since they didn’t reflect the collapse in energy prices.

The paper also examined the compensation Alberta received under the federal government’s fiscal stabilization program. It found that, although Alberta had a cumulative own-source revenues shortfall of almost $25 billion in the five years following 2014–15, making it eligible for assistance under that program, it only received a total of $503 million from that source.

The program, created in 1967, allows Ottawa to provide financial support to provinces when they experience significant declines in revenue, but it’s “woefully underfunded,” the paper said.

Barry Cooper, a University of Calgary political science professor, said the referendum has a better chance of boosting Kenney’s support than correcting equalization.

“As the exercise of a political art, it’s very good. Whether it will make any difference to the way that we are perceived by our erstwhile fellow citizens in Laurentian Canada is another matter entirely.”

Wesley also thinks it’s a political move by Kenney that would be hard to get the other premiers behind. He predicts that at the next first ministers’ meeting, the premiers will “probably give him a little bit of space on the agenda, [let him] say his piece, and move on.”

Cooper doesn’t think it likely that equalization will be removed, and believes Albertans will continue to see it as unjust and feel aggrieved.

“There’s no way that Quebec is going to say goodbye to $13 billion a year,” he said. “It’s completely corrupting. It corrupts the Government of Quebec because they don’t have to actually pay their own bills.”