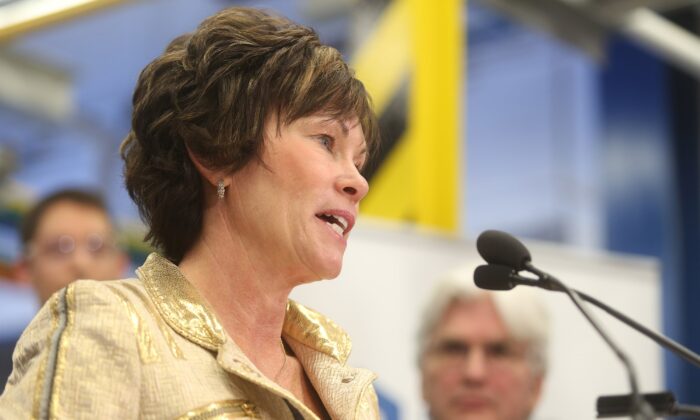 The key findings of the final report of an Alberta government-commissioned inquiry into campaigns against the province’s energy industry says it confirms the existence of “well-funded foreign interests” spreading “misinformation” to landlock Alberta’s oil and gas sector.

The report, compiled by forensic and restructuring accountant Steve Allan, was submitted to the provincial government in July and was made public on Oct. 21.

Announcing the release of the report, Energy Minister Sonya Savage said Albertans “have the right to be upset” about the campaigns that have helped counter fossil fuel projects and led to negative consequences for the economy.

“People lost their jobs, businesses went under, families were hurt, government revenues from royalties were impacted. We lost billions of dollars in royalties,” she said at a press conference on Oct. 21.

It notes that environmental organizations campaigning against Alberta’s oil and gas sector appear to work in concert to advance an agenda, and that they act “like an industry,” attracting sources of funding and employing large numbers of personnel.

“While many ENGOs [environmental non-government organizations] are driven by honest concerns, the commissioner found they are also focused on their own financial sustainability, which is ensured by adapting to emerging markets and trends and jumping from cause to cause,” a document highlighting the inquiry’s findings says.

Savage said the report “shines a blinding light on the broader movement and the vast amount of foreign funding that is crossing the Canadian border, often untraced.”

The inquiry was launched by the United Conservative Party government in 2019.

The inquiry encountered a range of criticism and obstacles, from environmentalists trying to shut it down altogether, to questions regarding the expenses incurred and the delay in submitting the final report.

“Did we need a multi-million dollar inquiry to discover that there were ENGOs who were opposed to the oil sands?” wrote Mount Royal University political science professor Duane Bratt in a tweet.

Some of the criticism from environmental organizations filtered through as members of the media asked Savage questions during the press conference.

One reporter asked Savage if “this whole endeavour [was] a mistake,” referring to the inquiry costing $3.5 million and “finding $54 million in foreign funding that was put towards these anti-Alberta energy campaigns.”

Allan writes in his report that he wasn’t able to pinpoint precisely the portion of the $1.28 billion in foreign funding that went toward anti-Alberta energy campaigns. The $54 million was singled out since it was found by the inquiry to be earmarked specifically for “anti-Alberta resource development activity.”

Another reporter remarked that the inquiry did not find illegal activities and complained that Alberta “spent all this time and money investigating people who are doing legal activities, exercising their rights to free speech.”

A different reporter followed up on that point, asking, “Are you against them doing that [exercising free speech]? Would you like people stop doing that?”

Savage said in a democracy people have the right to express their views, but she said the report is focused on foreign funding that influences Canadian political and regulatory decisions.

“What the report found was a co-ordinated campaign that ultimately targeted influencing political and regulatory change, using foreign funding. It is foreign funding, going after domestic processes and domestic policy and that’s the real concern,” she said, adding that the “multi-billion-dollar foundations in the United States aren’t concerned with the day-to-day life of Albertans.”

“Nothing in this Report should be taken as in any way seeking to limit these important rights and freedoms,” as it relates to opposition to Alberta’s oil and gas sector, the report said.

Allan noted, however, that open public debate has been stifled by activism and media bias.

“The environmental movement can be given credit for raising the issue of climate change on the national agenda. But I am concerned the discussion has become polarized and paralyzed to the extent it is nearly impossible to raise questions or make suggestions that don’t align with the agenda of the ENGOs, which is often supported by the media,” he wrote.

Reacting to the report, Greenpeace Canada said the inquiry found no instance of wrongdoing on the part of the campaigners, and criticized the inquiry.

“Even when it makes powerful interests uncomfortable, we will press on alongside Indigenous leaders and front-line communities, and with the backing of our supporters—no matter what intimidation tactics are thrown our way,” Keith Stewart, senior energy strategist for the group, said in a statement.

“The Inquiry’s findings that Greenpeace Canada has engaged in ‘Anti-Alberta’ activities does not follow legal requirements, ignores scientific evidence, and could have a chilling effect on freedom of expression and on the meaningful process of debate in a so-called democratic and free society,” added Ali Naraghi, legal counsel for Greenpeace.

The inquiry report in fact does not say any group is involved in “anti-Alberta activities,” but refers to “anti-Alberta resource initiatives.”

“I have also made it clear throughout my Report that I do not find that participation in an anti-Alberta energy campaign is in any way improper or constitutes conduct that should in any way be impugned, nor do I find that it indicates a party is ‘pro’ or ‘anti’ Albertan,” Allan wrote.

Tim McMillan, president and CEO of the Canadian Association of Petroleum Producers, said the inquiry shed light on the foreign-funded campaigns which have cancelled billions in revenue and thousands of Alberta jobs.

“For years, the energy conversation has been driven by activist organizations who have influenced energy policies that are today contributing to rising energy costs for Canadians, as well as energy shortages for our trading partners around the world,” said McMillan in a statement released to The Epoch Times.