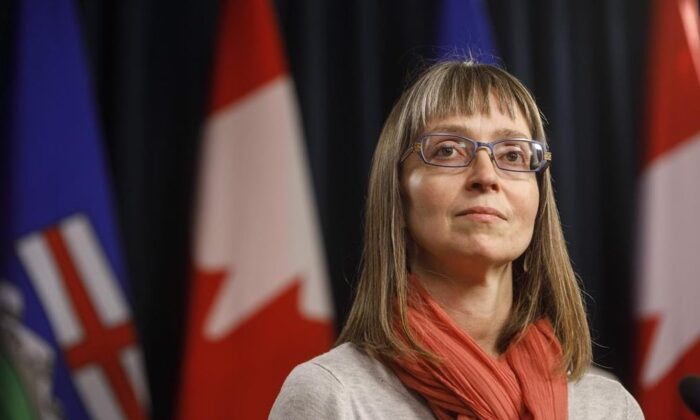 Hinshaw received the “cash benefits” in addition to her $363,634 salary in 2021, government records show. It marks the largest cash benefit payout of any provincial civil servant since the Alberta government began posting records in 2016, according to CBC.

Alberta Finance Minister Jason Nixon said the public service should not have the ability to “unilaterally approve significant overtime payments of this size.”

“The Public Service Commission has been instructed to undergo a full review of the policy to ensure that future overtime payments for emergencies go through Cabinet for approval,” Nixon said in a statement to The Epoch Times. “Until the review has been completed and a new policy has been confirmed, all future requests will be brought forward for (the) Treasury Board to review.”

The comments come as Premier Jason Kenney’s cabinet declined to take responsibility for the bonus. Former finance minister Travis Toews—now a candidate in the ongoing leadership race to replace Kenney—said he did not have prior knowledge of the bonus nor did he approve it.

Under Hinshaw’s direction, Alberta underwent a series of lockdowns and introduced a vaccine passport system. A number of churches were fined for staying open and holding services in breach of lockdown restrictions, and three Christian pastors were arrested.

In May, Kenney announced he would resign as UCP leader and premier after barely surviving a leadership review with support of 51.4 percent of party members. He cited lasting anger over his pandemic policies as a reason for his impending resignation, which will take effect when UCP members elect a new leader and premier on Oct. 6.

The bonus has garnered much attention in the ongoing leadership contest. UCP leadership frontrunner Danielle Smith said on Twitter that Albertans are “rightly stunned & outraged” by news of the bonus, while contender Brian Jean tweeted that the bonus “is unsettling, to say the least.”

If elected premier, Toews has promised to change the rules to ensure this does not happen again.

“Albertans expect their tax dollars to be spent with the greatest oversight. I have promised to change the rules to ensure this does not happen again,” he wrote on Twitter.

Candidate Todd Loewen—who was booted from the UCP caucus after calling for Kenney’s resignation over his pandemic handling—is calling for Alberta’s auditor general to investigate bonuses paid by the government, a request echoed by the province’s New Democratic Party.

Loewen wants an investigation and a performance audit completed on the budget for the 2021–22 fiscal year, focusing on the 107 cash bonuses awarded to government officials and ministry staff.

“We now have statements from multiple cabinet ministers saying that they had no knowledge of these bonuses being awarded,” the independent MLA wrote in a letter to Auditor General Doug Wylie on Aug 4. “Albertans deserve answers regarding what else happened with Alberta’s finances that cabinet was not aware of and whether the directors in place were truly being followed.”

NDP finance critic Shannon Phillips, in a letter to Wylie on Aug. 8, requested a performance audit of the bonus payment structures and processes related to the COVID-19 pandemic response.