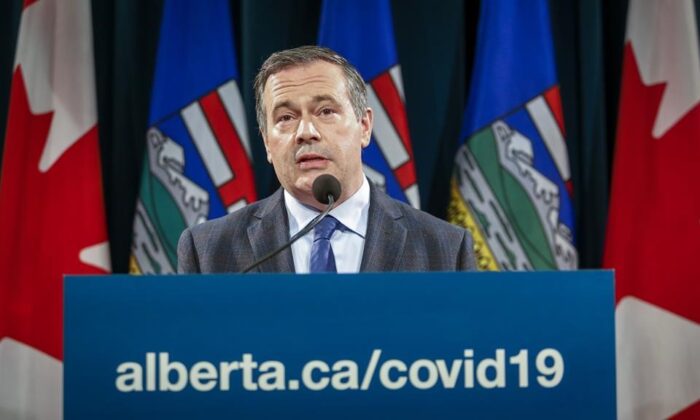 The Alberta government is looking into whether people with natural immunity against COVID-19 can qualify for its new vaccine passport, though it’s unlikely to be implemented soon.

“We’re looking at that,” said Premier Jason Kenney during a live public question and answer session on Facebook on Sept. 17.

He was answering a question about whether people who previously recovered from the virus are still required to be vaccinated to access services, given that they have developed immunity against the risk of reinfection.

“I’ve asked that we look more closely at that to see if we can replicate that as a feature of our program here,” Kenney said, noting that Israel and Denmark have allowed the proof of antibodies to be included in their vaccine passport systems.

Kenney said the exemption won’t come any time soon as it’s “logistically unworkable” to implement the system, noting the province can’t afford to wait for weeks to develop a system that would include the proof of antibodies, particularly given their “waning effects.”

He pointed to studies conducted by the Cleveland Clinic in Ohio and Maccabi Healthcare Services in Israel, saying that both show “there’s a very high level of protection from COVID amongst people who have a prior infection, but that it does wane over time.”

The Cleveland Clinic study, released as a preprint (non-peer reviewed paper) in June, states that “COVID-19 did not occur in anyone over the five months of the study among 2579 individuals previously infected with COVID-19, including 1359 who did not take the vaccine.” The study indicates it was “not specifically designed to determine the duration of protection afforded by natural infection.”

The Maccabi study, possibly referring to work conducted by the Maccabi Research and Innovation Center and also published as a preprint in late August, indicates that the SARS-CoV-2-naïve vaccinees (vaccinated individuals without immunity) had a 13-fold increased risk for “breakthrough infection with the Delta variant compared to those previously infected, when the first event (infection or vaccination) occurred during January and February of 2021.”

The study adds that “when allowing the infection to occur at any time before vaccination (from March 2020 to February 2021), evidence of waning natural immunity was demonstrated,” though those who had been vaccinated had an almost six-fold increased risk of breakthrough infection and a seven-fold increased risk for symptomatic disease. The vaccinated were “also at a greater risk for COVID-19-related-hospitalizations compared to those that were previously infected.”

The efficacy of mRNA vaccines wanes over time, a fact confirmed by the makers Pfizer and Moderna, which has led Israel and the Biden Administration to push for a third dose for the general public.

Israel has extended booster shots to everyone over 12, while some other countries are making them available for vulnerable populations at increased risk. Meanwhile, the White House is facing resistance from the Food and Drug Administration.

In Canada, the National Advisory Committee on Immunization has strongly recommended that immunocompromised individuals who are fully vaccinated receive an additional dose of an mRNA vaccine.

At a press conference on Sept. 15, Kenney said the Alberta health-care system “may run out of staff, intensive care beds within the next 10 days” if the surge of COVID cases continues. He also cancelled “thousands of surgeries and other procedures” to free up resources and staff, and expand hospital capacity for COVID patients.