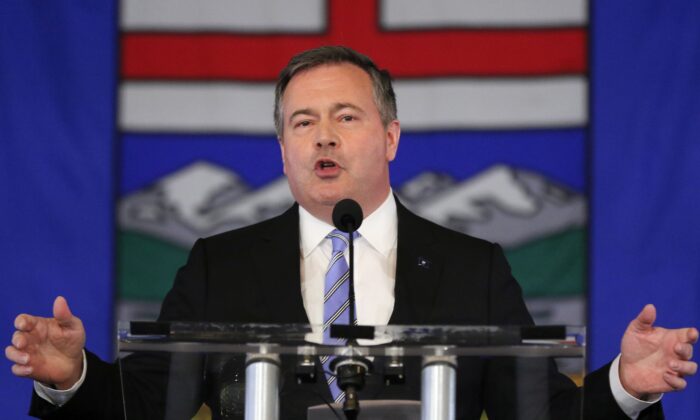 Alberta Premier Jason Kenney speaks in response to the results of the United Conservative Party leadership review in Calgary on May 18, 2022. (Dave Chidley/The Canadian Press)
Canada

The Alberta government will challenge federal legislation requiring that all plastics be labelled as “toxic substances” under the Canadian Environmental Protection Act (CEPA).

“It’s clear to Alberta that the federal government’s actions are unconstitutional infringement on our provincial jurisdiction under the Constitution,” said Premier Jason Kenney during a press conference announcing the province’s legal challenge on Sept. 8.

“The federal government has once again drifted out of its lane, straying into constitutional territory and has no legal right to be in it,” he said.

The amendment to CEPA listing all plastics as toxic substances came in April 2021 and read that “current scientific evidence confirms that plastic pollution is ubiquitous in the environment, and that macroplastic pollution poses an ecological hazard, including physical harm, to some animals and their habitat.”

Kenney said that Alberta’s petrochemical—or plastics—manufacturing sector is the largest in Canada and that, in the future, he expects the industry to bring $18 billion of investments to the province.

“Labeling plastics toxic substances is already having a negative impact on Alberta’s responsible and growing pet-chem industry by creating uncertainty for those investors,” Kenney said.

Alberta’s legal challenge comes as an intervention was brought before federal courts by the Responsible Plastic Use Coalition, which includes Dow Chemical, Imperial Oil, and Nova Chemicals.

Alberta’s Ministry of Jobs, Economy, and Innovation said in its “2020–2021 Annual Report” that plastics were Alberta’s second-largest export and brought in $3.6 billion of provincial revenue.

Asked by a reporter if the Alberta government believes plastics to be toxic, Kenney replied, “No, because they’re not.”

“You’re holding a plastic phone there,” Kenney said to the reporter. “I don’t think you believe that it has the toxicity of arsenic, which is the same category under which this has been listed.”

Kenney added he believes that the federal government labelled plastics as toxic substances for “political reasons” and said that their reasoning for doing so was “not supported by any scientific evidence.”

“If Canada is the only country in the world that says that plastic products are the equivalent of arsenic or lethal, then it begs the question, ‘Why would the industry invest here when they could go anywhere else in the world that treats plastics—regulates the industry, yes—but treats them like inert and safe products?'”