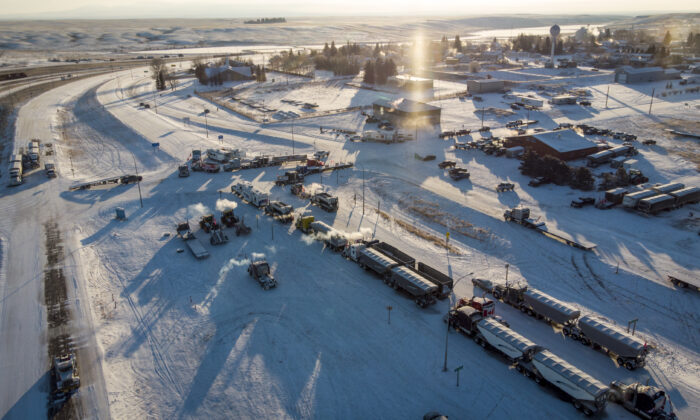 Protesters demonstrating against COVID-19 mandates gather as a truck convoy blocks the highway at the U.S. border crossing in Coutts, Alta., on Feb. 2, 2022. (The Canadian Press/Jeff McIntosh)
Canada

Protesters blocking Alberta’s main U.S. border crossing at Coutts say they are not leaving as long as federal COVID mandates and restrictions continue to stay in effect, despite the province’s vaccine passport having now been lifted.

John Vanreeuwyk, a feedlot operator from Coaldale, Alta., said in an interview with The Canadian Press that he and other protestors are blocking Highway 4 in solidarity with the trucker convoy that has driven to Ottawa to protest COVID-19 mandates and restrictions.

“We’re here for the big picture. It started with the border thing, it started with [Prime Minister] Trudeau and until Trudeau moves, we don’t move,” Vanreeuwyk said.

While Vanreeuwyk said he is grateful that Alberta Premier Jason Kenney recently ended the province’s vaccine passport requirements, it is not enough, as people are still required to wear masks indoors.

“Overall it’s disappointing… there was some good that [came] out of it but not even a 10 percent,” Vanreeuwyk said of steps the province has taken to lift restrictions.

In the first step of phasing out its restrictions, effective Feb. 8, Alberta will remove capacity limits for all businesses except large facilities and entertainment venues of over 500 people. On Feb. 13, masks will no longer be required for children aged 12 and under in any setting.

The province will enter step two on March 1 if hospitalizations continue trending downward, Kenney said at a news conference on Feb. 8. This phase would see capacity limits lifted for all venues, as well as the removal of masking mandates.

In the final phase of reopening, mandatory isolation will be only on a recommended basis, and COVID-19 outbreak protocols at continuing care homes will be lifted. A target date for this phase is yet to be determined.

The Alberta protesters have closed and opened the lanes of Highway 4 on and off since Jan. 29. The RCMP said late on Feb. 8 that the lanes were again closed due to the protest.

“Please be advised the north and southbound lanes to the Coutts border crossing are now closed due to protester’s [sic] blockade,” the RCMP said on Twitter.

Alberta’s acting Minister of Justice and Solicitor General Sonya Savage said the blockage near the Coutts border crossing “continues to be of concern,” in a statement released on Feb. 8.

“To repeat what we’ve said on several occasions: Alberta’s government will always stand up for people’s fundamental democratic right to protest,” she said.

“However, the constitutional rights to freedom of assembly and expression have reasonable limits. When protesters threaten public safety, disrupt the public peace or prevent Albertans from accessing vital infrastructure, then they open themselves up to potential action from law enforcement.”

Vanreeuwyk says as political figures increase pressure on protestors, it may have the reverse effect.

“We’ve got guys here—they’ve lost everything due to these mandates and they’re not giving up and they’re willing to stand their ground and keep going until this is done,” he said.

“The harder the politicians push the larger this is going to get.”

The Canadian Press and Andrew Chen contributed to this article.