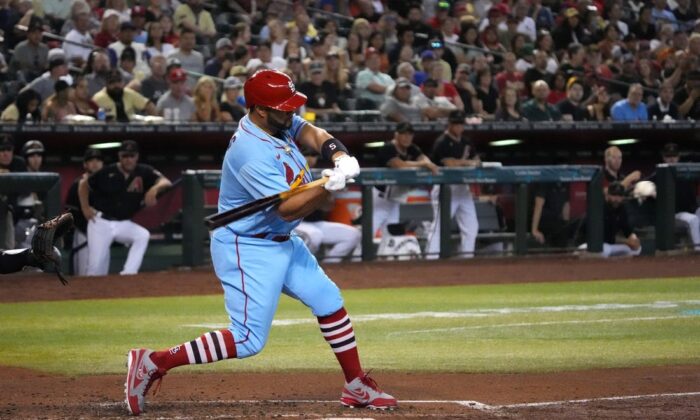 Albert Pujols went 4-for-4 and smacked two long homers and Paul DeJong hit a grand slam to lead the St. Louis Cardinals to a 16–7 victory over the Arizona Diamondbacks on Saturday night in Phoenix.

Lars Nootbaar reached base five times on three hits and two walks and drove in three runs on a two-run triple and an RBI single as the Cardinals won their sixth straight game and 17th of their last 21. Nootbaar scored on the triple due to an Arizona error.

Paul Goldschmidt homered and drove in four runs. He has 100 RBIs on the season.

Pujols also moved into second on the all-time total bases list with 6,143. He passed Cardinals legend Stan Musial (6,134) and only trails Hank Aaron (6,856).

Carson Kelly drove in three runs and Jake McCarthy homered for the Diamondbacks.

The Cardinals played without catcher Yadier Molina, who was placed on the restricted list prior to the game for “business matters.”

Arizona starter Madison Bumgarner (6–13) gave up five runs and seven hits over 5 1/3 innings while dropping to 0–4 over his last five starts. He struck out three and walked two.

There were two on with two outs in the sixth when Nootbaar hit a grounder just inside the first base line against Noe Ramirez. Arizona right fielder Daulton Varsho had trouble picking up the ball and was charged with an error as three runs scored, the last being Nootbaar standing up without a play to give the Cardinals a 7–4 lead.

Nolan Arenado hit a sacrifice fly in the seventh to make it a four-run game before the Diamondbacks scored three times in the eighth.

McCarthy led with his fourth homer of the season to right off Jordan Hicks to bring Arizona within 8–5. Kelly walked and Sergio Alcantara doubled before Hicks tossed a wild pitch for one run and Alek Thomas drove in another on an infield single.

Giovanny Gallegos replaced Hicks and retired the next three hitters.

In the ninth, Nolan Gorman pinch-hit for Pujols with runners on second and third with none out and he dropped an RBI single to center to make it 9–7. Later in the inning, DeJong hit his sixth homer, a grand slam to left off Edwin Uceta, to make it 13–7 and Goldschmidt added a three-run shot, his 31st of the season.

The Cardinals trailed 2–0 when Pujols came up with one out in the second and clobbered a first-pitch fastball from Bumgarner. The ball traveled 429 feet to left-center field.

St. Louis trailed 4–2 when Pujols led off the fourth with his second homer of the game and 13th of the season. This one sailed 437 feet to left-center off Bumgarner.

St. Louis starter Dakota Hudson gave up four runs and five hits over 4 1/3 innings. He struck out four and walked three. Genesis Cabrera (4–2) picked up two outs in the fifth for the win.