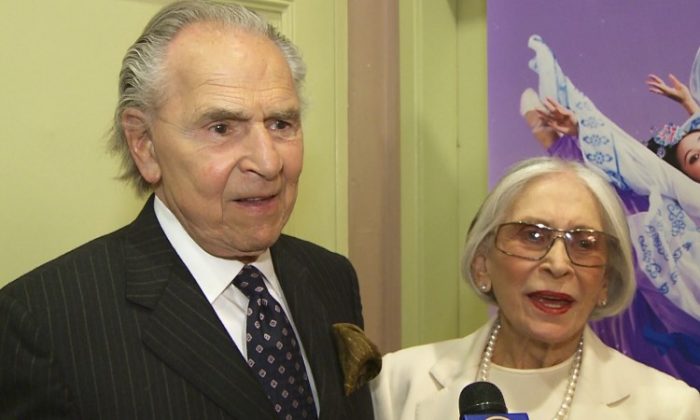 Albert and Pearl Nipon enjoy an evening at Shen Yun Performing Arts at Philadelphia's Merriam Theater on May 4. (Courtesy of NTD Television)
News

PHILADELPHIA—Albert Nipon enjoyed a night of dance and music at a performance by Shen Yun Performing Arts at Philadelphia’s Merriam Theater on May 4.

Mr. Nipon is famous for creating the Albert Nipon line of dresses, which became famous in 1984. His clients at the time included Nancy Reagan, Barbara Walters, Rosalynn Carter, and Mary Tyler Moore.

“The whole thing is beautifully choreographed,” Mr. Nipon said. “This is far, far superior to what we saw in China.”

Mr. Nipon attended the performance with his wife, Pearl Nipon, who designed many of the famous dresses.

“I didn’t want it to end,” said Mrs. Nipon. “We enjoyed it so very much. I’d like to see it again. It’s absolutely sensational.”

“Their dance culture and their music culture, it shows a very good part of China,” Mr. Nipon added.

For thousands of years, China’s culture was “centered on the idea of harmony between heaven and earth,” according to the company’s website. People of all walks of life treasured values like righteousness, propriety, loyalty, and bravery.

Having spent years in the fashion industry, Mr. Nipon represents a well-qualified point of view on Shen Yun’s costumes, which he said he greatly enjoyed.

“It was very entertaining. Just captivating. I was sorry to see it end so soon,” said Mr. Nipon. “I would have like it to go on a little longer.”