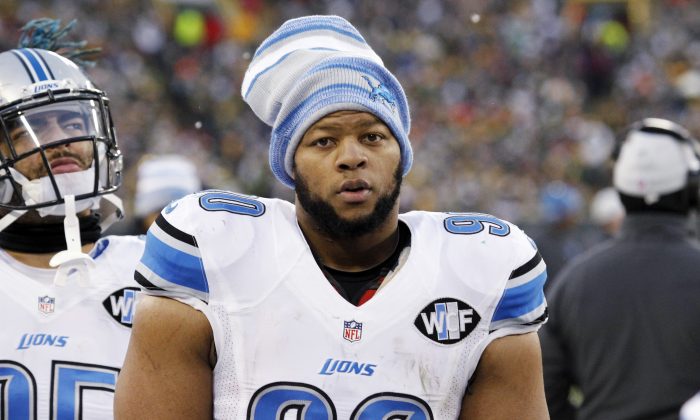 FILE - In this Dec. 28, 2014, file photo, Detroit Lions' Ndamukong Suh looks on during the first half of an NFL football game against the Green Bay Packers in Green Bay, Wis. Suh can play in Detroit's wild-card playoff game after his one-game NFL suspension was reduced to a $70,000 fine. Hearing officer Ted Cottrell heard Suh's expedited appeal Tuesday, Dec. 30, 3014, and ruled that Suh can play Sunday at Dallas but must pay the fine. (AP Photo/Matt Ludtke, File)
NFL

Albert Haynesworth All Over Again? Ndamukong Suh Gets Huge Contract

The comparison between Ndamukong Suh and Albert Haynesworth was made following the Miami Dolphins signing Suh for $114 million with $60 million in guaranteed money.

According to ESPN, Suh will get $60 million in the first three years on the contract.

Many were saying Suh would be the next Haynesworth, who played the same position as Suh–defensive tackle–and also signed a huge deal with the Washington Redskins in 2009. However, he performed poorly for Washington and played less than two seasons. He last played in 2011.

Haynesworth, 33, gave Suh some advice a few days ago: “He needs to really study, like, who he’s thinking about going to,” according to SportingNews.

He added: “Also, you need to kind of look at the track record of the coach, see if he’s going to stay, talk to some former players, just to get the inside scoop about it, and make sure that they’re playing the exact same defense as Detroit.”

“The Titans, really, upper management really forced the hand of me moving. I think, with Suh, I don’t think he really wants to stay, and I don’t think the Lions want to keep him, either. It’s going to be a little different, and what he’s got to do is study and pick the right place and, hopefully, it works out,” he also recalled.

With the contract, Suh, who played his entire career with the Detroit Lions, is the highest-paid defensive player in the NFL.

With the Lions, Suh was a dominant force in the middle for five seasons, making the Pro Bowl four times and being named first-team All-Pro four times. He has also played in 78 of 80 regular season games for Detroit while making 238 tackles with 36 sacks, 13 pass breakups, two forced fumbles, a fumble recovery and an interception.

With Suh comes one of the most dominating talents in the game, but also a player who has a history of being fined for player-safety violations. The only two games Suh missed in his career were due to a suspension after stomping on then-Green Bay offensive lineman Evan Dietrich-Smith. He was also initially suspended for Detroit’s playoff game against Dallas this season before his suspension was overturned and replaced with a $70,000 fine for stepping on the calf and ankle of Green Bay quarterback Aaron Rodgers.