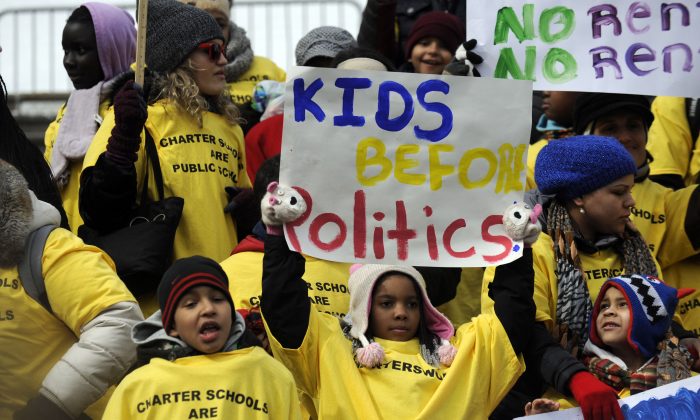 The state’s two most powerful politicians, who are at odds over exactly how to proceed with a New York education expansion, attended separate rallies in Albany with thousands of students and supporters.

“I am committed to ensuring charter schools have the financial capacity, the physical space, and the government support to thrive and to grow,” Cuomo told the cheering crowd.

But at that time many charter schools, including the Success Academy network, were already set on going to Albany on the grounds that the city’s administration is hostile toward them.

“We need one more push to get there,” de Blasio said. “Everyone in this room knows what full day pre-K would mean for our families.”

This is the fourth time de Blasio has gone to Albany since his term started. He wants the legislators to approve a slight income tax increase for New Yorkers making over $500,000 to fund the city’s pre-K and after-school expansion. Cuomo agrees with expanding pre-K, but he disagrees with de Blasio’s approach and wants to expand it at the state level.

De Blasio’s tax increase needs to be approved by the state, where Senate majority leader Dean Skelos said he wouldn’t allow a vote on the issue. Cuomo countered de Blasio with his own plan to fund pre-K with state money.

Both Democrats met after the rallies and talked for about two hours.

De Blasio met with the press after the meeting. He reiterated that both he and the governor support the expansion of pre-K and after-school programs. He also said he will support Cuomo’s re-election. He gave no specifics on whether he made any progress with Cuomo on his request for a NYC tax increase.