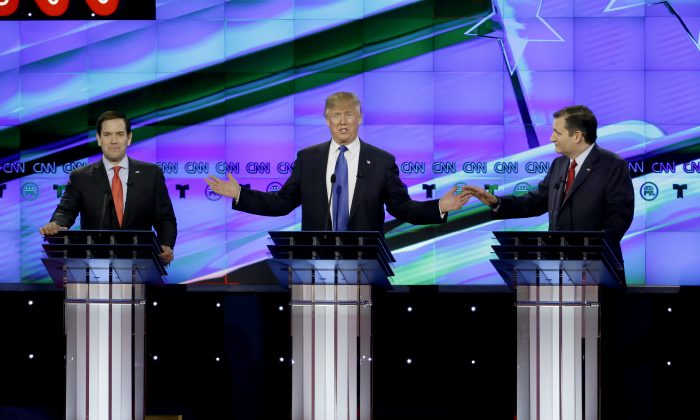 Alaska Republicans to Decide Who They Support for President

JUNEAU, Alaska—Alaska Republicans are poised to decide which of the remaining GOP presidential candidates will get their support.

The field has been winnowed in recent weeks as other states have held primaries or caucuses and some candidates have dropped out. Those set to appear on the Alaska GOP’s presidential preference poll ballot Tuesday are Donald Trump, Ted Cruz, Marco Rubio, John Kasich and Ben Carson.

Democrats will meet to make their choice later this month.

For the Republican event, there will be at least one polling site in each state House district, along with a site in Washington, D.C., due to the number of people working for the state’s congressional delegation there, state GOP spokeswoman Suzanne Downing said.

Absentee voting for members of the military is allowed, though Downing said only a handful of such ballots had been requested. Those are due by Tuesday night when the polls close.

The poll is open only to Republicans, though people can change their voter affiliation to Republican onsite to participate. Unlike primaries in Alaska, which are run by the state, the preference poll is run by the state GOP. And unlike state-run elections, voters can wear buttons or other regalia putting on full display who their candidate of choice is.

“This is a political activity,” Downing said.

Twenty-eight delegates are up for grabs and will be allocated proportionately to how well the candidates do in the poll. A candidate must get at least 13 percent of the vote in the poll to receive any pledged delegates for this summer’s national convention.

The party used to have a caucus, where people gather to debate the candidates and split off into factions for their preferred choice. But Downing said the poll is a way to be more inclusive and to encourage greater participation. The ballot each person casts in the poll is secret.

The Alaska Democratic party has caucuses, which will be held on March 26. Downing said the parties do not coordinate on the dates in which they hold the poll or caucus.

Jake Hamburg, spokesman for the state Democratic party, said the state received two additional delegates for holding their caucuses the same day Hawaii and Washington state hold their caucuses. It was part of a Democratic National Committee effort to encourage regional participation, he said.

The caucus is on a Saturday, to allow more people to attend, and is an example of “grassroots democracy,” where neighbors come together to talk about the candidates, Hamburg said.

There will be three names for consideration during the caucus: former U.S. Secretary of State Hillary Clinton; U.S. Sen. Bernie Sanders from Vermont; and little-known candidate Roque “Rocky” De La Fuente of California. There also is an uncommitted option, Hamburg said.