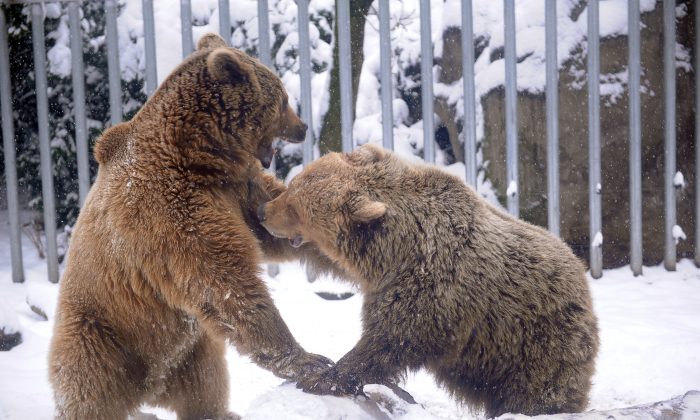 Brown bears play in their snow-covered enclosure at the Budapest Zoo and Botanic garden of the Varosliget public park in the Hungarian capital on March 27, 2013. (ATTILA KISBENEDEK/AFP/Getty Images)
US

An Alaska man recently survived a brown bear attack, thanks to the quick thinking of his friend, according to reports.

Alex Ippoliti and James Fredrick were riding their bikes along a gravel road at a U.S. military base in Anchorage, Alaska.

They heard a noise in the woods and before they knew it, a bear attacked Fredrick, Ippoliti said, according to Yahoo News. The bear “came out of nowhere and pulled him off his bike,” he was quoted as saying, “We didn’t see the bear until she attacked.”

As an Air Force member, Ippoliti said he knew that his friend’s life was in danger and that he needed to act quickly.

“I had bear spray in a pack on my bike and it was very easy to get it from there, fortunately,” he said.

Bear spray is capable of temporarily scrambling a bears senses, and is an effective and humane way of avoiding an attack.

“When [the bear] dropped him, she turned toward me and I was able to spray the bear,” he said.

The bear ran back into the woods while Ippoliti called 911 and tried to stop Fredrick’s bleeding from the injuries he sustained.

The pair had taken all the correct precautions that were recommended for the area, though Ippoliti said he’s never encountered a brown bear in the area. They later saw a bear cub nearby in a tree, which may have explained why the bear attacked.

“We had bear bells on and there was a lot of visibility on the gravel road as we were coming down,” Ippoliti said.

In a Facebook photo, Fredrick wrote: “This dude saved my life yesterday.” He was seen in a hospital bed, bloodied and injured.