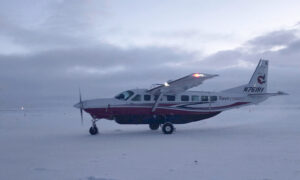 Alaska Gov. Mike Dunleavy (R) on Thursday praised President Donald Trump’s bid to ramp up domestic production of critical minerals such as rare earth elements and support mining jobs in the United States to reduce the nation’s reliance on Beijing.

In an interview with The Epoch Times’ “American Thought Leaders” program, Dunleavy said that the CCP (Chinese Communist Party) virus pandemic has exposed the nation’s weakness in a number of supply chains, including rare earths.

The president last month signed an executive order declaring a national emergency in the U.S. mining industry. It asks the Department of the Interior to look into implementing the Defense Production Act to fund mineral processing “that protects our national security.”

China is currently the top global producer of the specialized minerals, used to build electronics, military weapons, and other high-tech equipment. Last year, 80 percent of rare earths imported by the United States came directly from China.

“I think to some extent, we as a country have fallen asleep at the helm over the last several decades. And that, plus the concept of globalization has put us in somewhat limited position of weakness,” the governor said.

“From a strategic point of view, a defense point of view, at the very least … I think what the President is doing is absolutely correct. And that is identifying the fact that we have these weaknesses.”

Rare earths are an obscure group of 17 minerals, and there are no known substitutes for them. They are often found in precision-guided missiles, smart bombs, and military jets.

While the United States used to be the leading producer of the minerals, China currently commands a lion’s share of the market after it displaced competitors by strategically flooding the global market over the last few decades.

Dunleavy said that in Alaska alone, 30 of the 35 critical minerals identified by Trump as both essential and vulnerable to supply disruption are available for extraction, and that he is directing the state’s industrial development authority to provide funding for rare earth mining projects.

“[It] is going to bode well, not just for the economies of places like Texas, Wyoming, the Dakotas, Nevada, and Alaska, that have a lot of these rare earths, but it’s just good for America.

“What this pandemic shows is that if those supply lines are interrupted, either through a pandemic, or through policy, foreign policy, disagreements with those that are supplying the minerals, or the rare earths, then you find yourself it’s only at that point, you find yourself in a vulnerable situation.”

“The President really recognized this many years ago, that, you know, it’s incumbent upon us to recognize where our vulnerabilities are, and to bring those industries, that production, those supply chains home, so we don’t have to be beholden to foreign actors when it comes to policy. And again, the pandemic has just exacerbated the situation, really made it clear.

“This is an issue that we now recognize, and Senator Cruz and others have recognized this and we support what they’re doing. And that is to bring this these supply chains home so that we have the security that we need,” he added.