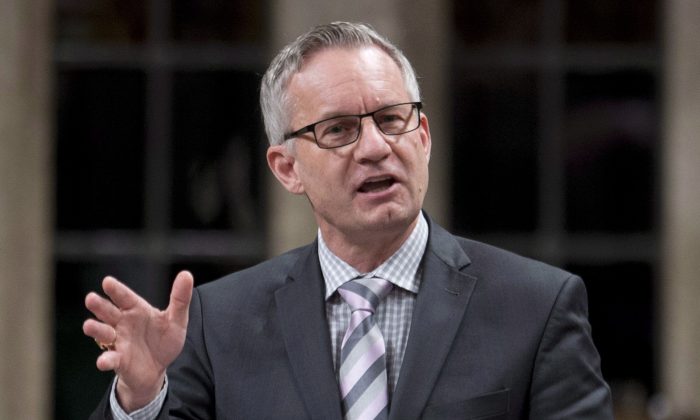 International Trade Minister Ed Fast responds to a question in the House of Commons on Nov. 27, 2014. The government has taken the unusual step of signing a legal order to prevent Alaska from imposing Buy American policies on the construction of a new ferry terminal in Prince Rupert, B.C. (The Canadian Press/Adrian Wyld)
Canada

OTTAWA—Alaska is refusing to budge after the Harper government issued a legal threat over the state’s plan to build on Canadian soil with exclusively American iron and steel.

In fact, the Alaskans insisted on Tuesday, Jan. 20, that they’re moving ahead with their project to build a new ferry terminal in British Columbia—protectionist provisions and all.

This week, the Canadian government took the unusual step of signing a legal order to prevent Alaska from imposing “Buy American” policies on the construction work in the B.C. coastal city of Prince Rupert.

International Trade Minister Ed Fast went on the offensive after the state rejected Ottawa’s demands that it abandon a rule requiring the Prince Rupert project to use only U.S.-made materials.

The rarely used Foreign Extraterritorial Measures Act would enable Ottawa to impose fines and take legal action against the project’s winning bidder if it complies with the Buy American provisions.

But an official in the Alaska governor’s office said Tuesday that the state intends to proceed with the ongoing call-for-tenders process and will deal with Canadian legal manoeuvres as they come.

“We’re going to respond to that action if and when it occurs,” Patricia Eckert said in an interview.

She said she expects Canadian companies, if they choose to bid on the project, would be “highly competitive.”

But since the project is receiving 91 percent of its funding from the U.S. federal government, and just nine percent from Alaska, it must adhere to Buy American restrictions. That means the project must use U.S. iron and steel.

Fast said Monday that Canada asked the governor to seek a waiver to remove the protectionist barrier. Walker declined that request, Eckert said.

“The reason Gov. Walker chose not to seek the waiver is that Alaskans and Americans benefit from the Buy American requirement,” she said.

The Canadian government signed the FEMA order for the Prince Rupert project, which is expected to cost around US$15 million, on the grounds it hurts the country’s interests.

Fast’s office has said the only other time Ottawa used FEMA was in 1992 in response to a U.S. attempt to restrict trade between Cuba and American-owned subsidiaries based in Canada.

The order permits Ottawa to take action against the project’s winning bidder if it follows protectionist U.S. legislation—action that could lead to fines against the contractor and police investigations.

A conviction under FEMA could mean a fine of up to $1.5 million for a corporation or up to $150,000 for an individual, as well as up to five years behind bars, according to information provided Tuesday by a spokesman for Fast.

“A waiver would have resolved this issue, allowing it to move forward without delay,” Rudy Husny wrote in an email.

“Alaska is denying Canadian companies, on Canadian soil, the opportunity to compete, and the clear benefits that arise from our integrated supply chain.”

Asked about the legal risks contractors could face from Canada, Eckert responded: “We’re going to let the bid process proceed and trust that people will make their own decisions.”

The construction project is part of an agreement in a 50-year lease signed in 2013 between the Prince Rupert Port Authority and the Alaska Department of Highways.

The Alaska Marine Highway has operated the terminal for more than 50 years as well as ferry service between Prince Rupert and the state.

Eckert said if the cross-border dispute causes an “inordinate delay,” the Alaskan government is prepared to continue its ferry service using existing facilities in Prince Rupert for the next several years, or until the feud is sorted out.

“There’s no emergency,” she said.