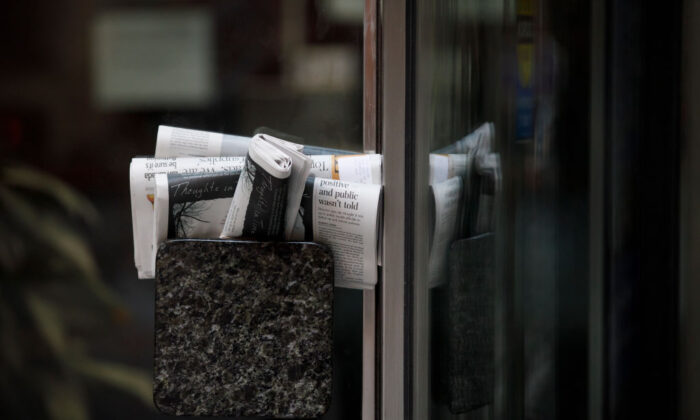 Newspapers are stuffed into a door handle of a closed building during morning commuting hours in Toronto on April 1, 2020. (Cole Burston/Getty Images)
Canada

Canadian journalism is undergoing an institutional shift, says a veteran in the industry, noting that this has led to a reluctance on the part of journalists to challenge talking points from the government, which he argues in some cases are meant to garner compliance from the populace through fear.

A journalistic institution that keeps journalists hustling to meet deadlines is a key factor contributing to their inability to challenge “state-mandated narratives,” Peter Stockland told The Epoch Times.

Stockland, a senior writer for Hamilton-based think tank Cardus, wrote in a recent commentary that this phenomenon is most evident in news reports about COVID-19 cases filled with what he characterizes as incendiary statistics. Journalists would “mix raw numbers and percolating percentages in the same paragraph,” rather than questioning the impacts of these “fear-inducing” data.

The greatest concern with the use of alarming statistics is that they are often used to serve “a particular political (or regulatory) end,” said Stockland, also a former vice-president of for Reader’s Digest Magazines Canada, and former editor-in-chief for The Gazette, a local newspaper in Montreal.

“As an example, the other day my wife said there’s 2,000 people a day in Tokyo who are testing positive for COVID, and I said in Tokyo there’s 13.9 million people. In the context of the population, would you be worried if 2,000 people a day are getting COVID in Tokyo?” Stockland said in an interview.

Stockland said one of the key functions of journalism throughout the late 19th and 20th century was to question what the “state wants to convince us of.”

“The very job of journalism is to question that stuff at every step of the way, and be rigorous in saying ‘Just a minute here. How do we know that’s true? Why should we accept that? Where’s your document to prove that?’ It’s fading away, and that’s what’s most worrisome,” he said.

But he said it would be “an error” to blame individual journalists, who are not given adequate time to study background documents and to “actually challenge things.”

“The ways that institution has now become structured, … it doesn’t give them the time. That’s what cultivates that sense of lazy journalism,” Stockland said.

“You’re on a tight deadline or you just got to get something cranked out. You shaved the corners. … You revert to alarmist tactics, to just cranking the thing up, so that you can get it out and get it done, and that’s what’s really troubling me.”

The COVID-19 pandemic has “speeded up” the shift in journalism, he said.

“It’s become expressly noticeable that there’s this reluctance, or inability, to challenge these mandated narratives,” he said, noting that the emergence of terminologies like “COVidiots” has particularly led to the “division of a population into those who are ‘thinking clearly’ and those who are ‘idiots’ or ‘morons’ just because they have concerns.”

Following the outbreak of the pandemic in March 2020, it became “pretty obvious that the fear factor was the way that people were going to be first nudged, and then propelled, into doing what the state wanted,” Stockland said.

He said his response to that would be, “If the fear that’s being inculcated is one that causes people to give up fundamental liberties, our rule of law, and the Charter, [then it] draws a pretty bright yellow line around that.”

Stockland said his biggest concern is that the inability to challenge “state-mandated narratives” will lead people to forget “what their actual liberties are.”

“What we’re at risk of losing is a memory of small liberties, the liberty to decide for yourself, whether you take particular medicine or not,” he said.

He gave the example of being at an airport and going through security checks. Some of those checks, even when they were introduced, were “recognized to be extraordinarily intrusive, and we just accept them now,” he said.

“Now we just shrug. Shut up. Don’t worry about it. Just get on the plane if you want to go where you want to go. With what you have to give up, we take it for granted, because we’ve forgotten that there actually was an issue of liberty there.”

Stockland said this fear-mongering creates two kinds of reactions among the populace: the “stampede effect” and the “left-behind effect.” The former would push people who are afraid, to move “in a particular direction that the powers want them to be moved,” whereas the latter would lead some people to “hunker down and get resistant.”

“A loss of liberties, that’s what I’m concerned about, is that we just forget that this actually was an impingement on our liberty, this was actually an intrusion, and we now just accept it as normal life.”